The Christmas decorations are already up in some Irish stores

Christ, retailers would be over the moon if they could keep the Christmas decorations up for 12 months of the year. 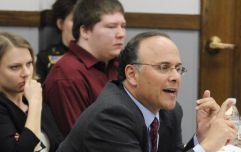 END_OF_DOCUMENT_TOKEN_TO_BE_REPLACED

FYI, it's not fecking Christmas in August. Stop trying to make this a thing.

Anyway, after Selfridges in London made headlines with their  attempt to spread some early festive cheer, the Irish branches of Brown Thomas have already put up their Christmas decorations.

Then again, there are always people that want to do their Christmas shopping in August. You know who you are.

Where's The Grinch when you need him?

Brown Thomas in limerick getting the Xmas decorations out already. No. Just no. pic.twitter.com/I2ZxUuSprE

The Big Reviewski || JOE · TBR Spotlight: The Falcon and the Winter Soldier Episode Four - 'The Whole World is Watching'
popular
The cast and director of Fast & Furious 9 discuss setting a sequel in Ireland
Female personal trainer shares the creepy messages she receives from men on social media
Dublin cyclist says he "could've died" after being pushed into ditch
This Time with Alan Partridge series two confirmed for end of April
What Netflix’s Seaspiracy gets wrong about fishing, according to a marine biologist
The 50 most iconic songs of all time* have been revealed
You can now get a life-size inflatable pub for your back garden
You may also like
1 month ago
Three gardaí injured, one hospitalised after anti-lockdown protest in Dublin
1 year ago
The full transcript of Leo Varadkar’s St. Patrick’s Day address to the nation
1 year ago
Harvey Weinstein found guilty on two counts, first-degree sexual assault and third-degree rape
1 year ago
Snail in a chicken and caterpillar in pork chops among 3,460 issues raised by consumers to the FSAI in 2019
1 year ago
Met Éireann issues status yellow rainfall warning for four counties
1 year ago
Army bomb squad called in over suspect device found in North Dublin
Next Page