WATCH: "Some of the biggest names in GAA" give their thoughts on the All-Ireland final

Some of the biggest names in GAA have had their say on the All-Ireland final, in the form of the hilarious Conor Sketches.

The All-Ireland final is now less than 24 hours away, and Gaelic Football fans have great reason to be excited about what's in store.

Will Dublin manage to win their fifth Sam Maguire in a row, or will their old rivals Kerry overcome them against the odds? 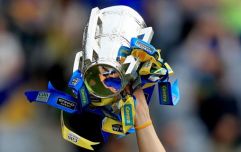 WATCH: American comedian Josh Pray is back with his reaction to All-Ireland final

END_OF_DOCUMENT_TOKEN_TO_BE_REPLACED

It won't be long until we find out.

But if you're unsure who's going to lift the trophy on Sunday, why not listen to the experts?

In a gas new video, Conor Moore (or Conor Sketches, as he's better known) impersonates some of the most well-known figures in the GAA to discuss the upcoming game.

Joe Brolly, Jim Gavin and Ger Loughnane are just some of the personalities that the video features.

We reckon the Bernard Brogan bit is the best. Take a look:

Some big GAA names give us their thoughts on the upcoming All-Ireland Football Final courtesy of @ConorSketches... pic.twitter.com/5Q8s9nj4Z1

Just the laugh we needed to calm the nerves ahead of Sunday's game.

House of Rugby Ireland · Quinn Roux on finding a home in Ireland and Mike McCarthy brings the absolute HEAT!
popular
Aodhán Ó Ríordáin passionately calls out Norma Foley in the Dáil
The full list of all the new shows and movies coming to Netflix in February
‘Dark red’ zones with stricter travel restrictions set to be introduced in the EU
Joe Biden has removed a bust of Winston Churchill from the Oval Office
“Nothing is more serious.” HSE Chief warns of worsening Covid-19 situation in Irish hospitals
Here's the lineup for The Late Late Show this week
10 prequels that are actually better than the movies that came before
You may also like
1 year ago
WATCH: Would you give in to the toughest GAA fan temptation?
1 year ago
Woman in Dublin scammed out of money and All-Ireland final tickets
1 year ago
Gardaí issue notice to anyone travelling to All-Ireland final on Sunday
2 years ago
Referee slammed after Cork wins All-Ireland Camogie Final
2 years ago
An 18-foot mural of four Gaelic football stars has been erected ahead of the Ladies' Football Final
2 years ago
RTÉ scraps plans to air Irish Sign Language version of national anthem before All-Ireland final
Next Page