'Could have spent the money fixing all the potholes everywhere! Useless waste of money!'

Council chiefs have been accused of wasting taxpayers money after painting a “weird” semi-circular cycle lane on a town’s main road. Residents in Halifax, West Yorkshire, were left baffled when Calderdale Council created the strange 8ft (2.5 metre) cycle lane on Kings Cross Road a few weeks ago, with some asking “what is it for?” and others branding it a “waste of money”.

They were also left bemused by what the odd marking could mean – leading to suggestions it was a space for a “gun turret” or a “turning circle for cyclists”.

END_OF_DOCUMENT_TOKEN_TO_BE_REPLACED

James Baker, 38, the Liberal Democrat leader in the council, said the markings could be a “danger” to road users left unsure of how they were supposed to be interpreted.

And he said it was “upsetting” that government money, which was supposed to be used to “reduce collisions” and "minimise air pollution", had been spent in this way. 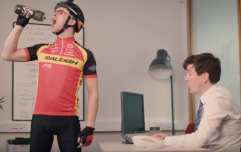 WATCH: Foil Arms and Hog perfectly sum up the 'smug cycling guy' in your office

END_OF_DOCUMENT_TOKEN_TO_BE_REPLACED

He said: “They have created this little weird semi-circle, and it’s left most local residents completely at a loss as to what it actually even means.

“It’s at a perpendicular right angle to the road. So it’s not even like you’re on a cycle lane and then suddenly enter it. We are trying to guess what it means.

“It’s so upsetting to see. You get funding for a scheme like this through regional money, and then you see it being poorly put to use in a way that makes a mockery of these improvements

“And confusion on the road is dangerous. If a cyclist misunderstands that or basically thinks it was something different, it could cause an accident.” 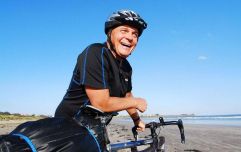 END_OF_DOCUMENT_TOKEN_TO_BE_REPLACED

James said most locals were scratching their heads to understand how cars, bikes and pedestrians were supposed to use them in practice.

James said: “We think maybe it’s a shared space for cyclists and pedestrians – and that it's telling cyclists they have to give way. That’s our best guess.

“But most residents are just confused. They’ve never seen something like this before in their lives.”

Calderdale Council got the money for the development through the West Yorkshire plus Transport Fund, and they were awarded just under £5m for the work.

But James said bosses at Calderdale Council had simply used the money for “gesture” projects, adding that the funds they received were being poorly spent.

He said: “They’re not improvements that are going to help cyclists sadly.

"It’s just a kind of gesture sign that we’re doing something but not spending the money very well.”

The strange markings come after council bosses were earlier slammed for leaving lampposts blocking another stretch of bike lane on the same road.

And furious locals vented their anger on Facebook about how their local authority had chosen to use their hard-earned cash.

One wrote: “Out there somewhere is someone being paid good money to come up with this idea, more worrying is that someone out there is willing to pay good money.

Another added: “FFS! What is the point of that? Could have spent the money fixing all the potholes everywhere! Useless waste of money!"

Others on social media took turns to guess what bizarre road markings could mean while coming up with their own hilarious suggestions.

One wrote: “It’s a magical Calderdale forcefield for bikes, you can leave your bike and it won’t get nicked.

"Calderdale Council are asking for volunteers to try it. If you are brave or daft enough.”

Another quipped: “Got it!! It’s a gun turret to shoot van drivers that park on the pavement or town planners”

Adrian Gill, Calderdale Council’s Assistant Director of Strategic Infrastructure, said: “The new cycleway and footway improvements at King Cross aim to make it easier for people to walk and cycle in this traditionally car-dominated area.

“They form part of the A58 Corridor Improvement Programme, which is funded through the West Yorkshire Combined Authority’s West Yorkshire Plus Transport Fund.

“As part of the design, there is a dropped kerb that allows cyclists to safely leave the carriageway to access the shared area for pedestrians and cyclists.

“The design markings on the dropped kerb reflect the requirement for cyclists leaving the carriageway to give way to users of the shared space.

“It has been designed this way due to the limited space available and its effectiveness will be reviewed in the coming months.

“It then leads to a newly installed cycle crossing and a further stretch of cycleway at the bottom of Warley Road.

“The cycle lane provides a segregated link for cyclists from King Cross centre to new crossings across the A646 and A58, allowing cyclists to avoid the busy King Cross junction.

“The cycleway is bi-directional as marked and is designed to national guidance.”

popular
Conor Mcgregor hit by car ‘at full speed’ while cycling
New Netflix series deserves to be as big as Stranger Things
The JOE Friday Pub Quiz: Week 331
Couple left mortified after best man delivers incredible punchline during speech
Peaky Blinders creator on the lookout for 'skinheads' for new drama
All of the new Netflix movies and shows arriving in February
DJ accidentally shoots herself in the face with a confetti cannon while performing
You may also like
1 year ago
Woman arrested over Tour de France's worst-ever crash
1 year ago
New app launched to help Dublin cyclists find safer routes
1 year ago
Dublin cyclist says he "could've died" after being pushed into ditch
2 years ago
Government confirms €63.5 million in funding for Greenway projects in 13 counties in 2021
2 years ago
€55 million allocated to 547 walking and cycling projects in eight counties
2 years ago
Liffey Cycle Route trial looks to be going ahead
Next Page