Details of George Michael's upcoming funeral have been shared

George Michael's funeral will be a small affair, at a tiny venue with enough seating for just 30 people.

A family source has told The Sun on Sunday that it will take place a small chapel at Highgate West Ceremony, before the singer is buried alongside his mother.

There will reportedly be space for only a handful of non-family guests. A date for the ceremony is yet to be confirmed, but it has been suggested that it will take place next week. 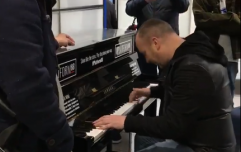 END_OF_DOCUMENT_TOKEN_TO_BE_REPLACED

Michael passed away on Christmas Day 2016 at the age of 53, with coroner Darren Salter later confirming that the musician died of natural causes.

He had carried out many secret but meaningful acts of generosity during his life, many of which only recently came to light.

The former Wham! frontman also had an impressive solo career, reaching number one in the singles charts on multiple occasions in the 1980s and 1990s.

His last studio album, Patience, topped the charts in several countries after its 2004 release.

popular
Gardaí warning people not to make unnecessary journeys in anticipation of Storm Barra
Man dies after being attacked by newly calved cow in Mayo
Carlow woman banned from keeping animals for life after starving dogs to death
This new rom-com about writing a Christmas #1 is absolutely going to make you cry (in a good way!)
A terrific crime thriller is among the movies on TV tonight
The JOE Movie Quiz: Week 131
"Danger to life" risk with Storm Barra "weather bomb", warns Met Éireann
You may also like
3 years ago
Two new movies inspired by classic Prince and George Michael songs are now officially in the works
3 years ago
One year on from his death, George Michael's family share letter with his fans
4 years ago
George Michael's cause of death has been revealed
4 years ago
WATCH: Adele stops George Michael tribute at the Grammys, swears, nails it second time around
4 years ago
WATCH: James Corden told a lovely story about George Michael on his first show of 2017
4 years ago
BBC Four are giving their entire schedule over to George Michael tonight
Next Page