They're called man's best friend for a reason.

Children who have a dog are less likely to suffer from anxiety, a new study published in the journal Preventing Chronic Disease suggests.

Researchers from Bassett Medical Center in Cooperstown, New York, set out to find out if having a four-legged friend in the house could do more for your kids than just be a playmate.

END_OF_DOCUMENT_TOKEN_TO_BE_REPLACED

To do so, the researchers asked parents of children aged four to 10 who came in for well-child visits to answer a questionnaire about health-related topics, among them pets in the home, before the checkup.

The researchers formed two study groups based on the answers, one with children who had a pet dog at home and the other with kids who did not.

"We studied children with dogs because that was the most common pet and allowed us to collect a large sample of children," research scientist and study author, Dr Anne Gadomski, explains to CBS News.

The study included 370 kids with dogs and 273 kids who didn't have one.

END_OF_DOCUMENT_TOKEN_TO_BE_REPLACED

Among the 58% of children with a dog, 12% tested positive on a screening test for anxiety, compared with 21% of children who did not have a pet dog.

"What we actually found was children from homes with pet dogs had lower anxiety scores than children in homes with no pet dog," says Gadomski.

And while she acknowledges that further studies are needed to determine cause and effect, Gadomski, who is a dog owner herself, said she finds it very interesting looking at pets and childhood mental health from a preventive health angle.

"Childhood anxiety is a huge mental health problem in the U.S. and anything we can do to mitigate anxiety or prevent its development would have a huge impact on the mental health system in the United States." 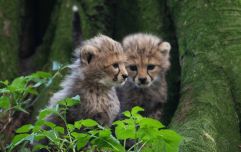 END_OF_DOCUMENT_TOKEN_TO_BE_REPLACED

As to why having a dog is beneficial to children's health, Gadomski explains: "Interacting with a friendly dog also reduces cortisol levels, most likely through oxytocin release, which lessens physiologic responses to stress. These hormonal effects may underlie the observed emotional and behavioural benefits of animal-assisted therapy and pet dogs.”

popular
Amazon Prime Video has just added 38 very big movies to its library
Mia Khalifa claims seaside town is better than Miami
The Banshees Of Inisherin is arriving on Disney+ sooner than you might expect
The 50 most iconic songs of all time* have been revealed
U2 drummer Larry Mullen Jr. says band may perform without him in 2023
Woman hit by rollercoaster is trapped in own body after finally awaking from coma
Cruise ship passenger who fell overboard swam with sharks for 20 hours
You may also like
11 months ago
QUIZ: Do you know the collective name for these groups of animals?
11 months ago
Public urged not to abandon their older pets as part of new Christmas campaign
1 year ago
Pet dog catches Covid from its owner in first UK case
1 year ago
National Poisons Information Centre issues warning over false widow spiders
1 year ago
Liveline listeners shocked as woman tells of youths harming dog in Dublin
1 year ago
Terrifying video shows guest at reptile centre rescuing handler pulled in by alligator
Next Page