You can't tell us didn't know exactly what it was doing.

Flies, as we all know, are the most annoying creatures on the planet. Flies are bastards. They're even worse than people that don't say thank you after you hold the door open and worse still than the people who get their feet out in public. 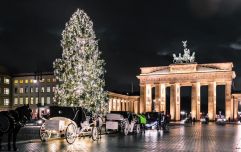 Pining for Christmas already? Experience your very own winter wonderland in Berlin

END_OF_DOCUMENT_TOKEN_TO_BE_REPLACED

On and on goes the merry dance and even with the windows open all around it, the fly still somehow manages to find that exact same square inch of glass to bash into as hard as possible, repeatedly, as though eventually it might just force a fly-shaped hole through to the other side.

So yeah, flies are quite annoying. Generally speaking.

Now imagine one had just knocked over 600,000 dominoes you had spent two weeks setting up with tweezers.

Does that sound infuriating? Does it? Because, yeah. Yeah, it does. It sounds really, really fucking infuriating.

And believe it or not, that is exactly what happened. This is a cold, cold universe we inhabit, people. Never forget that.

A team of 22 people spent a week setting up 596,229 mini dominoes with tweezers. Then, inevitably, a fly came along. 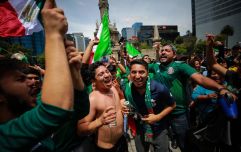 WATCH: Fans in Mexico celebrated their win over Germany so hard that it caused a small earthquake

END_OF_DOCUMENT_TOKEN_TO_BE_REPLACED

The tiles were no bigger than a fingernail and somehow a fly managed to knock one over because, as we've established, flies are complete pricks like that.

Patrick Sinner of the group told a local newspaper: "The fly triggered the chain reaction prematurely. There was no time to set up all the little tiles again."

The attempt took place in Nidda, near Frankfurt on Friday and means the record remains at 537,938 fallen tiles.

All was not lost, however, as they did manage to break four other records: longest chain reaction, longest spiral, longest wall and longest cube.

You can watch their 500,000 domino display from last year below:

The Big Reviewski || JOE · TBR Spotlight: The Falcon and the Winter Soldier Episode Four - 'The Whole World is Watching'
popular
Beware of the very clever WhatsApp hack that is locking Irish users out of their accounts
The 50 most iconic songs of all time* have been revealed
Motor insurance costs set to fall from June after changes to payout guidelines
Making A Murderer: The explosive and NSFW telephone call that implicates a new killer
Reeling in the Years was watched by over half a million people last night
NIAC recommends AstraZeneca vaccine should only be given to people 60 and over in Ireland
PICS: The man with the biggest penis in the world has one unbelievable problem with it
You may also like
7 months ago
Bodies of five children found in German apartment
1 year ago
Germany bans gatherings of more than two people
1 year ago
Hash cake accidentally served at German funeral
1 year ago
Two dead following shooting near German synagogue
1 year ago
A German court has ruled that hangovers are an illness
1 year ago
German politicians call for SUV ban after four pedestrians killed in one incident
Next Page