WATCH: It was absolutely lashing snow in Donegal on Tuesday

It's beginning to look a lot like Christmas... Halfway through January.

On Monday, a snow/ice warning was issued for the entirety of Ireland, but the majority of the country didn't get any of the snow part.

It was absolutely freezing, and that was about it.

But a video has emerged from Carndonagh in Donegal on Tuesday afternoon, and there was certainly no shortage of snow up there.

We know that snow can be a bit of a polarising subject, but this looks fairly beautiful to us. 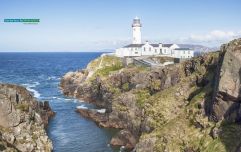 END_OF_DOCUMENT_TOKEN_TO_BE_REPLACED

Cheers to Donegal Weather Channel for the video.

It was absolutely pelting down. We can only hope for more of that over the coming days.

Unfortunately for us snow lovers, the weather is expected to be slightly milder on Thursday and Friday before turning cold again heading into the weekend; more information can be found on the Met Éireann website.


popular
QUIZ: Can you name all the Irish counties just by their shape?
PERSONALITY TEST: What percent tosser are you?
QUIZ: Can you match the Father Ted quote to the character that said it?
Gardaí arrest woman (40s) in relation to the three children that were found dead in Dublin
PERSONALITY TEST: Which Peaky Blinders character are you?
Australian scientists claim to have made "significant breakthrough" in diagnosing coronavirus
Peaky Blinders creator confirms the first plot details for Season 6
You may also like
5 days ago
Appeal made for information after a significant jewellery and cash theft in Letterkenny
2 weeks ago
Hundreds of cannabis plants worth €400,000 seized in Donegal
3 weeks ago
Gardaí appealing for witnesses following "serious" traffic collision in Donegal
1 month ago
Woman in her 20s dies after car crash in Donegal
1 month ago
A man in his 30s has died following a single vehicle crash in Donegal
1 month ago
Met Éireann issues wind warning for Donegal ahead of nationwide "freezing fog" next week
Next Page