One of the cocktails is the D.U.Pina Colada. Which is pure genius.

You know the way in movies and TV shows that deal with the impending apocalypse, there is always someone, somewhere, who has set up a Party For The End Of The World?

Well, while this isn't quite that, it isn't a million miles away from that either. It's half apocalypse pints, half leaving drinks for all of the UK.

END_OF_DOCUMENT_TOKEN_TO_BE_REPLACED

Yep, on the night of Friday 29 March, Searson's on Baggot Street in Dublin are hosting a Brexit-themed party, giving the UK a fitting send-off as they embark on... who knows what.

It will be free admission, with a live gig by The Backstop Boys: a one-off EU supergroup, formed specially for the night! There'll also be a DJ playing all of the UK greats like Bowie, Queen, Oasis, Elton, Spice Girls, Madness, Blur, The Bee Gees, Take That, and loads more.

They're also putting together a series of special cocktails for the night, including the 'Theresa Maytini' - which they've described as a Martini with a sour twist - as well as an 'Old Fashioned Tory', and, yes, a 'D.U.Pina Colada'!

It all kicks off at 8pm, and with the proviso that if the UK is granted an extension, guests will enjoy a bar extension, too. 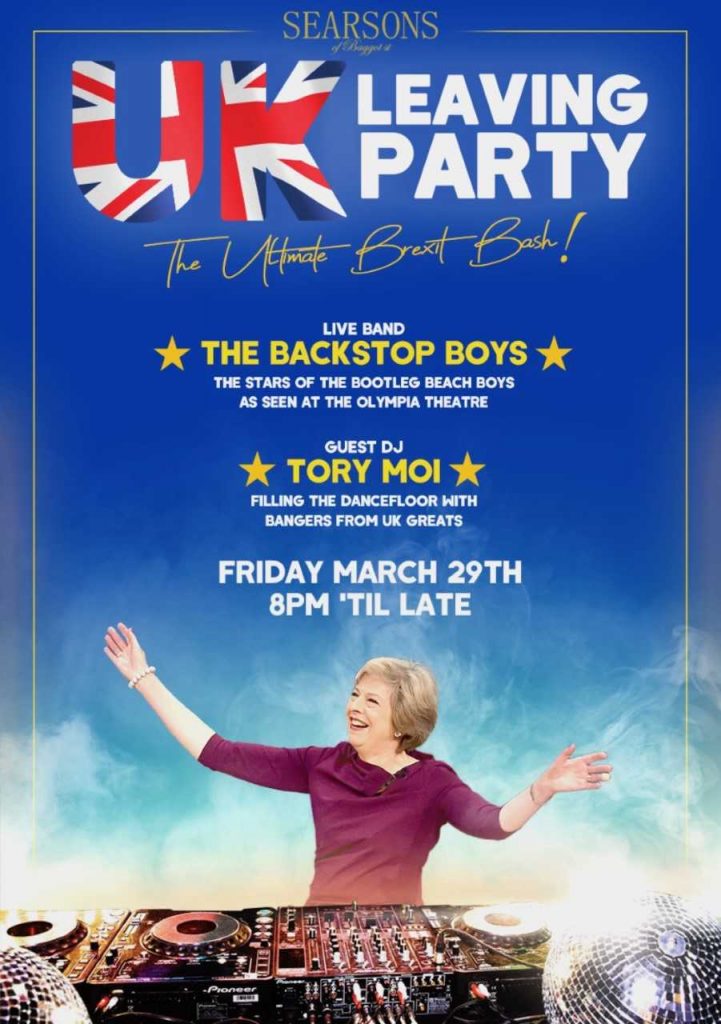 popular
20 years ago, one of the best sci-fi movies of the 21st century was a box-office bomb
U2 drummer Larry Mullen Jr. says band may perform without him in 2023
Peter Kay moved to tears on stage while opening his first stand-up tour in 12 years
The 50 most iconic songs of all time* have been revealed
Mia Khalifa claims seaside town is better than Miami
Simon Cowell concerns fans with appearance as they 'don't recognise him'
The JOE Movie Quiz: Week 182
You may also like
1 week ago
Dublin nightclub suspends security guard following racism allegations
3 weeks ago
QUIZ: How well do you know the towns and villages of Dublin?
1 month ago
Man in serious condition following assault near Connolly Station in Dublin
1 month ago
Gardaí investigating "all the circumstances" following discovery of woman's body near Luas tracks
1 month ago
Two girls seriously injured in crash involving car and pedestrians on busy Dublin street
1 month ago
Plan to build Dublin's tallest building refused by council
Next Page