A full weekend filled with huge international and Irish stars.

In the same weekend that Dublin's main street was transformed by a rainbow of colour, Norway had to cancel its Pride events following a shooting in a gay bar in its capital city.

At the same time we celebrate our progressiveness, one of the world's most famous musicians takes to one of the biggest stages in the world to put a spotlight on rights being taken away from women in America.

END_OF_DOCUMENT_TOKEN_TO_BE_REPLACED

It has been a short seven years since the Marriage Referendum passed here, four years since Repeal the Eighth, and 30 months since the pandemic began. A lot can change in a very short amount of time, and this year's Pride celebrations felt particularly profound, as they were the first time Ireland's queer community and its allies could celebrate properly in public since 2019.

And this year, it felt like everyone involved was pulling out all of the stops.

What other time of year would you get thousands of people singing along with Brazilian pop star Anitta in Spanish, Portuguese and English, without missing a trick?

END_OF_DOCUMENT_TOKEN_TO_BE_REPLACED

She was just one of a number of international stars that graced the capitol to celebrate the weekend. Queer club organisers Mother amassed an incredible collection of performers over the Friday, Saturday and Sunday, which also included Years & Years, Peaches, Jodie Harsh, Le Boom and Rina Sawayama.

Taking place in Collins Barracks, the three-day mini-festival was filled with nothing but glitter, good vibes and great music, with every act greeted with deafening cheers and constant swaying and/or gyrating.

Mother's usual haunt at Lost Lane was also the location for the festival's afterparty, while elsewhere around the city, Dublin's handful of queer-friendly spaces - The George, Street 66, PantiBar and PennyLane - became hubs of celebrations, with the newly pedestrianised Capel Street rammed to capacity, partyers spilling out over on to the surrounding tertiary streets and lanes. 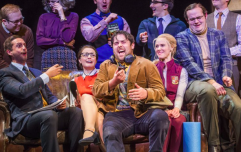 REVIEW: School of Rock brings the same great chaotic energy to the stage

END_OF_DOCUMENT_TOKEN_TO_BE_REPLACED

They were actually joined by Dublin's newest inclusive bar, All My Friends, which opened its doors on Meath Street, and just around the corner on Saturday, Irish drag queen royalty Victoria Secret and Davina Devine held their own party.

Victoria, who is already well known by Drag Race fans for bringing some of the biggest drag queens in the world to perform in Ireland, and Davina co-hosted an evening filled with incredible Irish talent, including performances from R&B star Erica Cody (who performed an incredible cover of Ginuwine's 'Pony') and Ireland's most-recent Eurovision entry Brooke Scullion (who immediately won over the crowd by performing Cher's 'Believe').

As would be expected, not everything went according to plan: Rina Sawayama had all of her luggage misplaced while on her flight to Dublin (resulting in a last-minute call on social for make-up artists and/or stylists) and a big performer apparently pulled out at the list minute (rumoured to be a former member of a very famous girl group).

But after three full days of concerts, parties and events, featuring some of the biggest Irish and international stars of music and drag, Dublin has now officially put itself on the global map for places to celebrate Pride.

popular
Nearly 100 flights delayed at Dublin Airport on Monday
QUIZ: Can you get top marks in this short but tricky Irish geography quiz?
The Resort is the new must-watch for fans of big murder mysteries
Family of Ashling Murphy share heartbreaking tribute at Fleadh Cheoil
The 50 most iconic songs of all time* have been revealed
4-year-old girl killed in Sligo caravan park named as Alice Dunleavy
RTÉ tries to solve Michael Collins murder in new documentary
You may also like
10 hours ago
Man in his 20s in critical condition following assault at public transport stop in Dublin
17 hours ago
Murder investigation launched after discovery of man's body in Dublin apartment
1 day ago
Man arrested following discovery of a body in apartment in Dublin
1 day ago
Motorcyclist in his early 20s dies following two-vehicle collision in Dublin
2 days ago
Lewis Capaldi and Niall Horan busk together on the streets of Dublin
4 days ago
Man arrested in Dublin over suspected people smuggling operation
Next Page