He reckons his ginger locks would give him a marketing advantage.

Ed Sheeran is apparently moving into the world of skincare as he is launching an extra strong suncream for gingers - that he says will be factor 70.

The hitmaker already has his own restaurant and management company but it sounds like he is eyeing up a new business venture. 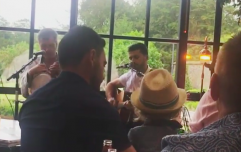 END_OF_DOCUMENT_TOKEN_TO_BE_REPLACED

The singer, 31, who boasts a net worth of £260m (€297m), reckons that his own ginger hair and fair skin would give him an advantage in the market as people would trust him to know what he's on about.

Explaining that it would be "for fun", the hitmaker shared: "You would buy sun cream if my face was on it.

"Because you’d be like 'He definitely knows what he’s talking about' If you were going to a hot country and you needed Factor 70."

There might have been a few redheads and gingers who would have liked some factor 70 this summer during the heatwave.

Instead, red-headed people in the UK were offered the opportunity to shelter in cinemas to avoid the searing heat.

But, whilst the ability to burn may be a downside to having ginger hair, there are plenty more benefits, as proven by science.

popular
One of the most underrated crime thrillers of recent years is among the movies on TV tonight
Netflix has just added 12 very big movies to their library
5 years ago, Hollywood took a massive gamble on a huge sequel... and lost big time
Tom Hardy set to play Hannibal Lecter-type serial killer in new series
Netflix backtracks on anti-password sharing measures following user outcry
‘Older’ woman who took Prince Harry’s virginity gives her side of the story
Guy Ritchie's new war movie looks like it'll be a very emotional watch
You may also like
9 months ago
Ed Sheeran and Ireland – a strangely tepid love affair that somehow endures
9 months ago
The JOE Music Quiz: Week 101
10 months ago
The JOE Music Quiz: Week 96
1 year ago
The 10 Worst Songs of 2021
1 year ago
The top 10 'greatest of all time' songs have been revealed
1 year ago
Ed Sheeran says Game of Thrones cameo backlash ruined the experience for him
Next Page