Ever wondered what happened to Vanilla Ice? Joe shows you what he's been up to

Have you ever wondered what happens to Vanilla Ice when ‘Ice Ice Baby’ comes on the radio? Read on to find out.

Rapper Vanilla Ice was hot stuff in the 90’s. He topped the charts with ‘Ice Ice Baby’ as the first hip-hop single to reach the top of the US billboard charts. He wrote the song about a drive-by shooting when he was just a boy of sixteen. After a short music career, he turned his hand to jet-ski and motocross racing but got into drugs and his career collapsed.

END_OF_DOCUMENT_TOKEN_TO_BE_REPLACED

So where is he now?

Real name Robert Van Winkle (we kid you not), he’s transformed himself from rapper to… lighting salesman. We guess when the lights go out on a rapping career, you have to find a way to turn them on again. But by selling lighting and lighting designs, really? 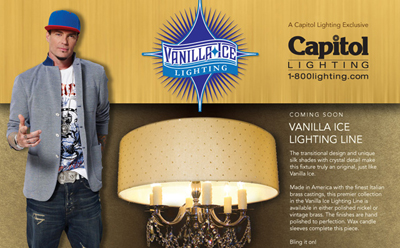 Mr. Ice currently works for Capitol Lighting in Florida and has designed what he calls ‘Vanilla Ice Lighting’, a line of chandeliers and wall sconces. Ah, but fair play to him, at least he's trying to 'lighten up' about his past.

Check out this advert for lighting, starring Ice himself. And yes, he actually says “Light, lights, baby”.

popular
Waterford man sentenced to three months imprisonment for operating "cruel and illegal" puppy farm
The long-awaited MetroLink is finally happening, for real this time, honest
Netflix has just added 33 very big movies to its library
The full list of cancelled flights in and out of Dublin Airport on Monday (so far)
QUIZ: Can you guess the crisps from the pixelated packet?
One of the coolest movies of recent years is now available to watch at home
QUIZ: It's time for one of our trickiest General Knowledge Quizzes yet
You may also like
1 month ago
Buying or building your first home? This FREE virtual event is perfect for you
1 month ago
Galway named one of the top 10 best European cities to raise a family
1 month ago
Coleen Rooney 'confident she's won' Wagatha Christie trial against Rebekah Vardy, according to reports
1 month ago
Ireland's first ever "Bar Manager Apprenticeship Degree" to launch this week
1 month ago
REVIEW: Van Gogh Dublin is a truly unique cultural experience
1 month ago
One of the longest lunar eclipses of the decade will be visible in Ireland tonight
Next Page