FEATURE: These are the 10 different types of Leaving Cert student

You are one of these people; if you claim you're not, you're lying.

The Leaving Cert is nearly upon us, and whether you're doing it in two weeks, or you did it 25 years ago, somehow those final days of secondary school always manage to stay fresh in your mind.

Regardless of the year you sat the cursed exams in, the characters you encounter in 6th year remain the same.

Introducing the 10 different types of Leaving Cert students that you will deal encounter.

1) The planner: This is not the type of person you want to be. Sure, make a timetable, and by all means stick to it, but if you get to the point that you are allowing yourself 3 minutes and 54 seconds of free time every week, there is something seriously wrong. There are some things in life that you can't plan for, so don't be the guy who flips out because they only managed 58 minutes of economics study instead of the 60 you allocated yourself.

2) The abject mess: This is the other end of the spectrum, and is even more dangerous. 6th year is a stressful year, no doubt about it, but there is NO excuse for showing up to a maths exam without a calculator. This is the type of person who will message into your group chat 17 times asking what time the exam is at, and still show up 25 minutes late. Organisation is key, don't be the mess.

3) The one who stresses everyone out: You encounter some despicable characters in 6th year, but do not be this guy. We all know the type. They'll come up to you five minutes before the exam starts, when it's way too late to do anything, and ask if you have covered a specific section, knowing damn well you haven't, and then they'll make some sort of face as if to say "Oh, unlucky". Don't be this guy.

4) The one who "knows what's coming up": They don't. Nobody does. Even if the quiet kid who sits in the back corner of the classroom says that their aunty is on the State Examinations Commission, they still don't know. Don't listen to them. In some subjects, you can kind of predict what's coming up, but don't listen to anyone who claims to have a man on the inside, cos they definitely don't.

5) The liar: Okay this is a complicated one, perhaps the most important and definitely the most common. This person, who is making my skin crawl as I type, is the person who has the audacity to claim they don't study, and then they do brilliantly. They are the worst people in the world. And that is no exaggeration. If I had my way, instead of higher level math students getting an extra 25 points, the people who claim they do no study and then do well lose 25 points. It's the only way to eradicate these types of people. 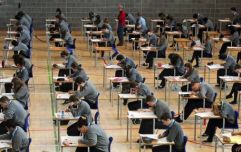 END_OF_DOCUMENT_TOKEN_TO_BE_REPLACED

7) The messer: Not to be confused with 'the mess' (see above), the messer is someone who will divide opinion. The most polarising figure in your year. Some love him, some hate him: The messer is truly the pineapple on pizza of 6th year. The messer is the one that, despite the fact that exams start next month, he is sitting at the back of the class, rolling paper balls and throwing them across the room. In my eyes, you need a messer as a release from the stress, but some people actually want to do well in exams, so have some sympathy for them.

8) The athlete: Perhaps the most impressive character on the list. The athlete (usually a county minor player) is the person who is training 'til midnight the night before Irish paper two, and sipping on a protein shake half way through the exam itself. Luckily the athlete tends to get some sort of scholarship for third level education, making up for the fact that they have trained for 98% of their teenage life and wouldn't know the definition of Pythagoras' theorem if it stood up and offered them a haircut.

9) The one who just doesn't care: Normally this guy has got his next few years planned out, and they don't involve third level education. Therefore, the Leaving Cert doesn't have that much importance and they can kick their feet up while everyone else is frantically highlighting every word of Othello.


popular
HSE confirms no nurses in Ireland have died from Covid-19
How the Covid-19 emergency will change the way we shop for groceries
The bizarre Tiger King story on Netflix barely scratches the surface
Here are the 8 best movies on TV this Tuesday
Virginia governor issues stay-at-home order until 10 June
The JOE Movie Quiz: Week 45
Man in serious condition after being stabbed multiple times in Cork
You may also like
6 days ago
Group of Leaving Cert students call for exams to be cancelled
1 week ago
Cancelling oral and practical exams the fairest decision for the most students
1 week ago
Leaving and Junior Cert oral and practical exams cancelled, students to be awarded full marks
7 months ago
More than 9,000 students have appealed their Leaving Cert results this year
7 months ago
Students receiving their Leaving Cert results urged to remain calm
7 months ago
Parents urged to encourage ‘sober-curiosity’ amongst school leavers ahead of Leaving Cert results
Next Page