Ever stayed in any of these?

Forbes Travel Guide has announced its new 2020 ratings and there's good news for eight Irish hotels who were included in the annual honours list.

Ashford Castle in Mayo joins a group of luxury hotels around the world that have earned a Five-Star Forbes Travel Guide (FTG) ranking and is the only hotel in Ireland to be included on the Five-Star list.

However, seven other hotels were also mentioned with The Westbury Hotel, The Fitzwilliam Hotel, The Intercontinental Dublin and The Shelbourne Hotel listed in the Recommended section.

While the Merrion, The Marker Hotel and the K Club were given a Four-Star rating.

The 2020 awards celebrate 1,898 Star-Rated properties in 73 countries; the full list can be found here. 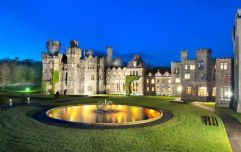 The best hotels in Ireland have been revealed

END_OF_DOCUMENT_TOKEN_TO_BE_REPLACED

Forbes’ team of inspectors travels the world anonymously to assess hotels, restaurants and spas based on 900 objective standards that determine its ratings, paying particular attention to the provision of exceptional service.

“We have been committed to championing genuine Five-Star service for more than 60 years, and this year’s winners exemplify the very highest standards in hospitality,” said Filip Boyen, CEO of Forbes Travel Guide.

“It is difficult to earn a Forbes Travel Guide rating, and all our Star-Rated winners have shown how incredibly deserving they are of their accolades by demonstrating sheer dedication in their passion for service.”


popular
Tesco make changes to their delivery system to favour elderly and in need customers
Here's Week 27 of JOE's 19 in 90 quickfire quiz
Someone in Ireland is €311,413 richer after Wednesday's Lotto draw
This Irish raffle is giving you the chance to win a €250,000 Ferrari
Gardaí set up checkpoints on major roads across the country to stop Easter travel
The 50 most iconic songs of all time* have been revealed
QUIZ: Can you name all of these characters from Love/Hate?
You may also like
3 years ago
The Irish Hotel of the Year has been named
1 month ago
Next time you're in UCD, keep an eye out for a flying spice bag
1 month ago
The most Instagrammed honeymoon destinations in the world have been revealed
1 month ago
Lonely Planet have created an alternative bucket list for those travelling around Ireland
1 month ago
South Korea and parts of Italy now under coronavirus quarantine
1 month ago
Frank's RedHot Sauce is now selling Bloody Marys in a can and we want to down it
Next Page