No new Graham Norton. No new Late Late. What else is there to do tonight??

Completely lost as to what to do on your Friday night in with your favourite chat shows done for the summer?

Don't worry, you're not alone.

Technically, both Graham and Ryan are on tonight, but they're both Best Of shows, with no new guests to brighten up the start of your weekend, so what else can you be doing to entertain yourself tonight.

END_OF_DOCUMENT_TOKEN_TO_BE_REPLACED

We've got some suggestions:

Go to the cinema to see Baby Driver

Currently sitting pretty with 98% on Rotten Tomatoes, Baby Driver is destined to end up in Best Of 2017 lists come December, and it is in Irish cinema right now. We've chatted with the writer/director - the same guy behind the likes of Shaun Of The Dead, Hot Fuzz and The World's End - as well as some of the crazy cool cast, which includes Jamie Foxx, Kevin Spacey, Jon Hamm and Jon Berenthal.

It really is one of those movies that everyone will be talking about for the rest of the summer, so get out ahead of the crowd and see it ASAP before it gets ruined for you.

Crash Bandicoot has just been re-released for the PS4

END_OF_DOCUMENT_TOKEN_TO_BE_REPLACED

That's right, the classic platform game has been given a next-gen visual upgrade, with the first three games packaged together in one cheaper-than-a-normal-game bundle price. You can download it right now from the PS Store, and the N. Sane Trilogy giving either (A) a mega-injection of nostalgia, or (B) a brand new addiction to entirely replace sleep in your life.

We've got one movie and one series that we reckon you should check out, both only released in the last few days, and both definitely worth your time.

The movie is Okja, and it features an all-star cast, and we've already written about why it is most definitely worth your time, but the comparisons to the likes of Babe and Spirited Away should be enough to have you pushing play on it already. 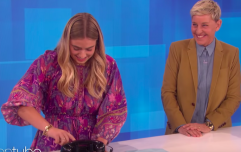 END_OF_DOCUMENT_TOKEN_TO_BE_REPLACED

The TV show is Glow, and again, we've gone into some detail about why the show is amazing, but the a glam 80's production about the Gorgeous Ladies Of Wrestling from the makers of Orange Is The New Black isn't enough to entice you, then we're not sure anything could be.

The Big Reviewski || JOE · The Big Reviewski with Andy Serkis, Squid Game follow-ups & the return of Succession
popular
Ryanair is seeking applicants for "the worst job in Ireland"
The JOE Friday Pub Quiz: Week 265
QUIZ: Can you master this General Knowledge Quiz?
National Lottery reveals 28 locations where tickets worth over €35,000 each were sold
Warning after person has bank account cleared out hours after scam text
NEW JOBS ALERT! If you're looking for a new career, this opportunity could be perfect for you...
PICS: The man with the biggest penis in the world has one unbelievable problem with it
You may also like
1 day ago
The return of Succession and 10 more movies and shows to watch this week
2 days ago
5 of the best 2021 movies and shows on Disney+ you might have missed
5 days ago
Alan Quinlan: Young people on social media are "suffering in silence... it's very, very dangerous"
1 week ago
A great Irish horror is among the movies on TV tonight
1 week ago
Squid Game fans spot massive clue in Tug of War game
1 week ago
COMPETITION: You're one very easy question away from winning a €200 One4All voucher
Next Page