Hangovers can be a nasty experience, but we all have our individual ways of dealing with them.

And let's be honest, almost all of them involve some sort of food. Lots and lots of food.

Which is why we think a lot of people will be interested in CraicPack's new "Hangover Box Care Package".

CraicPack, who are well known for their fun Irish gift boxes sent around the world, has released a new pack that we reckon will be a massive hit.

The care package is shipped in a box covered in Irish sayings and contains some well-known Irish cures to send to friends and loved ones overseas, including: 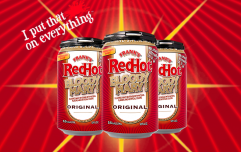 END_OF_DOCUMENT_TOKEN_TO_BE_REPLACED

Sounds pretty good to us.

The box can be shipped all around the world, so if you want to do a massive favour for one of your pal's living in a different country, now's your best chance.

"We know what it’s like to have a hangover while living abroad,” said the team at CraicPack. “Sometimes you just want to have a Tayto sandwich when you wake up or Airwaves chewing gum and MiWadi to get through your work day."

Now if you'll forgive us, we're suddenly craving absolutely everything on that list.


popular
Sinn Féin announce a series of public rallies to take place in five counties
QUIZ: How many of these Derry Girls characters can you name?
Met Éireann issue rainfall warning for 19 counties, with a side of snow
QUIZ: Can you name the Sega Mega Drive game from the screenshot?
How well do you remember these classic PlayStation 2 games?
The JOE Friday Pub Quiz: Week 179
Met Éireann predicting snow this weekend and well into next week
You may also like
2 weeks ago
The most romantic people in Ireland are from Athlone, Waterford, and Tralee
2 weeks ago
Rent prices fall for this first time in seven years, but it is still mostly bad news
3 weeks ago
'The Ireland I would like to see' is an incredible new campaign launched by UCC
3 weeks ago
First-time buyers of Dublin! Fancy watching Crazy, Stupid, Love with us?
3 weeks ago
A Holy Show takes the hijacking of an Aer Lingus flight and makes it absolutely hilarious
3 weeks ago
Dublin to host a Taco Battle cook-off this February
Next Page