Yep. In the ENTIRE world.

Considering how progressive Ireland has proven itself to be over the last few years, you would think that the rest of the world would have picked up on that.

However, there has always been something about Inis Beag, which actually led to cultural anthropologist John Cowan Messenger studying the small island off the coast of Cork in the 1960s, reporting that the men and women of viewed sexual intercourse as duty, and something "to be endured".

END_OF_DOCUMENT_TOKEN_TO_BE_REPLACED

On the other end of the scale, however, were the inhabitants of Inis Beag.

Now, we don't speak Spanish, so (along with the accompanying image below), we'll let Darragh tell us what he found.

END_OF_DOCUMENT_TOKEN_TO_BE_REPLACED

"The description of what the islanders get up to, or better, don't get up to, behind closed doors (very closed doors apparantly) gave us quite a laugh," Darragh told JOE.

"According to the researcher (of whose credentials is unkown), the people of Inis Beag are so sexually 'repressed' that the men view sex as 'a loss of vital energy' and they avoid it for this reason. Women who 'experiment with orgasms' are accused of being 'depraved and perverted'."

Now, again, we've come a long way in the 20 years since this booklet was published, and while we're not saying that the folk in Inis Beag have gone full Papua New Guinea-orgy, we should probably investigate if the Connemara-adjacent folk still feel like the beast-with-two-backs is depraved and perverted. 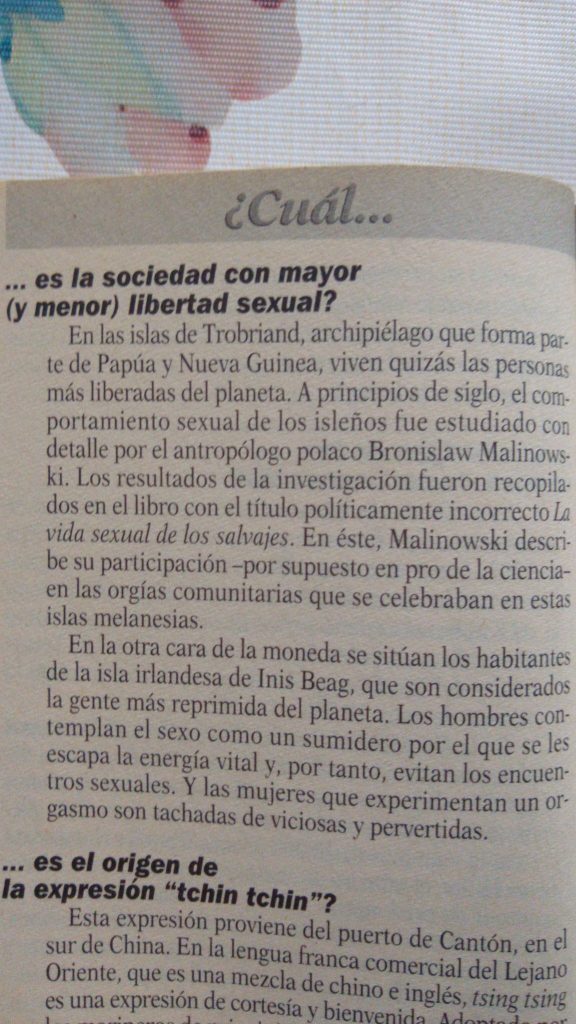 Cheers to Darragh Coleman for sending this our way. Got a story for JOE? Fill out our online form here.

popular
Travis Barker rushed to hospital after tweeting "God save me"
Calls for €20 social welfare increase and minimum wage of €13 in new Budget
Amazon Prime Video has just quietly added 15 big movies to its library
Irish man dies following hit-and-run in London
The 100 best clubs in the world have been revealed
Flavoured vaping products could soon be banned in EU
007 producers provide new update on Bond 26
You may also like
22 hours ago
New €360 million plan announced to tackle gender-based violence in Ireland
6 days ago
Eir prices to increase every April from next year
6 days ago
A hidden gem stands out at the top of TripAdvisor's list of the top 10 attractions in Ireland
1 week ago
Tomorrow is set to be the hottest day of the year but it’s not going to last
1 week ago
Varadkar defends volatile exchanges with Pearse Doherty, says they were "self-defence"
1 week ago
QUIZ: Can you name the 32 counties of Ireland in order of size from the biggest to the smallest?
Next Page