Remember the Dress? The Dress? Of course you do, and by the way, it was black and blue.

That was able to be put to bed pretty quickly because all it took was someone to take an actual, non-flash photo of the dress and the world was righted back to it's original axis.

However, the brain-twisting conundrums of visual trickery has returned, and the internet is preparing to spark a civil war with itself over the photo. 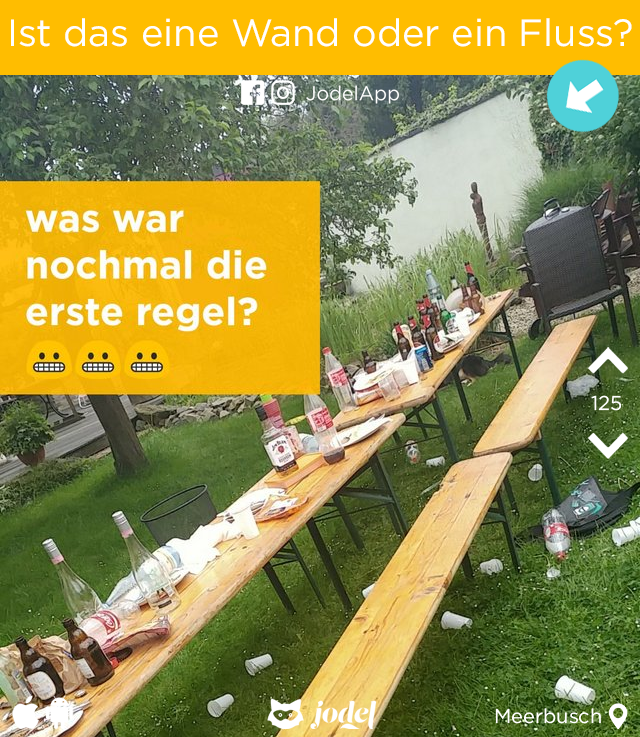 The image first appeared on German entertainment app Jodel, and has since sparked a Wall VS River debate that puts Trump VS Clinton into the shade. Of the moon. Of Jupiter.

@jodelapp it's clearly a river. No doubts on that :)

@jodelapp It's a wall, no discussion. The object on the top have a shadow on the wall. The color of wall is reflecting on the bench. Finished.

@jodelapp Was there a protest when this Wall was built?

Or you could just be the most laid-back person of all time, like this dude:


The Architects Of Business || JOE · "It doesn't get bigger than this for me" - Irish scientist wins EY Entrepreneur of the Year 2020
popular
QUIZ: How well do you know Elf?
QUIZ: Can you guess these European countries from their outlines?
The JOE Movie Quiz: Week 80
The 50 most iconic songs of all time* have been revealed
The JOE Music Quiz: Week 35
Donald Trump paid $3 million for recount that uncovered more Biden votes
Warner Bros. plan new Harry Potter movie and they want Daniel Radcliffe to star in it (Report)
You may also like
1 year ago
25 of the funniest tweets you might have missed in October
1 year ago
WATCH: RTÉ raised their game with their Halloween reporting on Thursday
1 year ago
Personality Test: What percent clown are you?
1 year ago
WATCH: The trailer for Season 14 of It's Always Sunny features melons, poison and laser tag
3 weeks ago
Calling all pub owners! One of Ireland’s leading restaurants is offering franchise opportunities in these 14 locations
4 weeks ago
Rare "blue moon" will be visible over Ireland on Halloween night
Next Page