They've also made an early prediction as to whether we can expect a White Christmas.

If anyone needs to keep on top of the weather around Christmas time each year, it is Santa Claus.

He obviously keeps a close eye on all of the forecasts from all around the world, and this year he appears to have joined the team at Met Éireann to talk about the extreme weather that Ireland has experienced on Christmas Eve and Christmas Day through the years.

So if you've ever wanted to know when it was coldest, or what year we had the most snow or the most rain, read up on Santa's full Irish weather Christmas Day report right here: 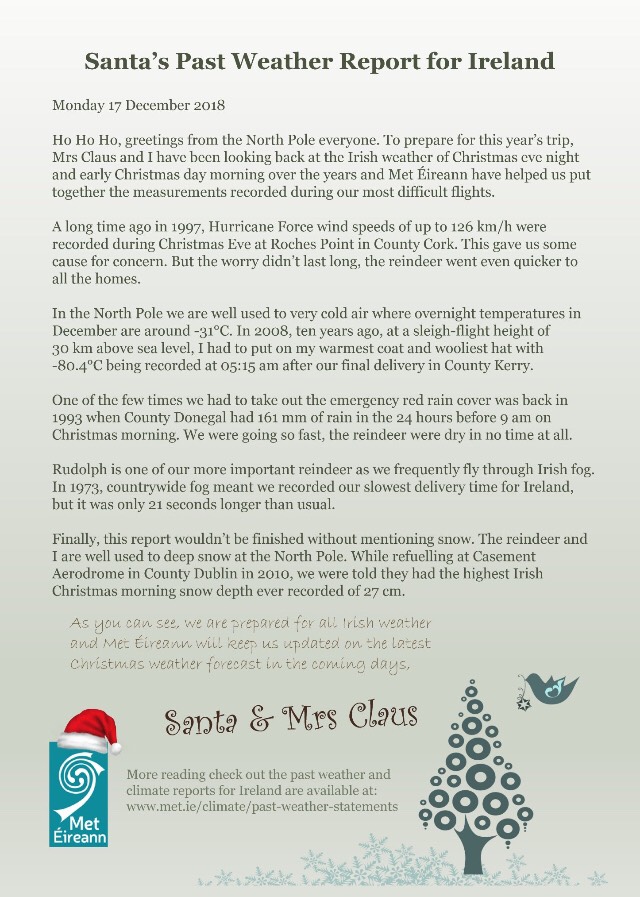 Meanwhile, Met Éireann asked folks on Twitter which weather they'd most like to see on Christmas Day, as well as giving a very early prediction as to what we can expect on the 25th:

Snow was the winner! ❄️
It's too early yet to give a definitive forecast for Christmas Day, although our latest guidance suggests it will be relatively settled, mostly dry with temps about average. A lot can change between now & then so stay up to date at https://t.co/dz6JbE5FIb

popular
Harvard study reveals how many times men should ejaculate each month to stay healthy
Parents left in shock after gorillas start mating in front of kids at zoo
Colin Farrell shouldn't win the Oscar this year
The JOE Friday Pub Quiz: Week 331
Conor Mcgregor hit by car ‘at full speed’ while cycling
Netflix has just added one of the best sci-fi movies of recent years
New sci-fi horror set to be this year's A Quiet Place
You may also like
3 weeks ago
Jeremy Renner was talking to family member when 14,000-pound Sno-Cat ran him over, police reveal
4 weeks ago
It looks like we'll be reeling in the New Year with a LOT of rain
1 month ago
Two Status Yellow warnings issued with wind and rain in the mix
1 month ago
Two new Status Yellow warnings issued as poor weather continues
1 month ago
Snow predicted as triple weather warning issued by Met Eireann
1 month ago
Live weather updates, warnings and advice as Ireland goes through massive cold snap
Next Page