Ireland has voted for the Hail Mary as its favourite prayer

An absolute classic, in fairness to it.

This is it lads. The moment we've been waiting for. After years of deliberation and discussion, we finally have a decisive answer.

Ladies and Gentlemen, the people of Ireland have voted for the nation's favourite prayer, and the Hail Mary has come out on top. 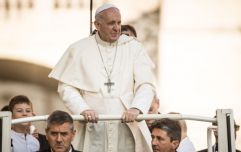 END_OF_DOCUMENT_TOKEN_TO_BE_REPLACED

People in attendance at the 88th National Ploughing Championships were invited to vote for Ireland’s favourite prayer as part of the Diocese of Kildare and Leighlin’s presence at this year’s event, and it was the Hail Mary that took home the gold.

The Hail Mary (or 'sé do bheaha, a Mhuire', if you're a Gaeilgeoir), received 61% of the vote by attendees, while O Angel of God (the Guardian Angel Prayer) received a very respectable 39%.

According to CatholicBishops.ie, Bishop Nulty spoke about the hunt for the country's number one prayer, saying: “Our visitors always appreciate gifts of blessed salt and wristbands, and our various wall displays. Despite so much activity at our stand, many people value a little quiet time too, in prayer.”

Nulty also said that he was "overwhelmed" by the response to try and find Ireland's favourite prayer.

Now we just need to figure out the country's favourite hymn. Maybe next year's Ploughing Championship will give us the answers.

The Big Reviewski || JOE · The Big Reviewski with Andy Serkis, Squid Game follow-ups & the return of Succession
popular
Claire Byrne was having absolutely none of Nigel Farage's claims on Monday night
An asylum seeker in Cork is on hunger strike to attempt to remain in Ireland
Netflix has revealed the release date for new episodes of Ozark
An underrated Denzel Washington thriller is among the movies on TV tonight
The 100 greatest TV shows of the 21st century have been revealed
Confusion reigns over social distancing element to nightclub reopening plan
Forest Whitaker's intense Oscar-winning role is among the movies on TV tonight
You may also like
1 month ago
Bishop quits church after falling in love with satanic-themed erotic fiction writer
9 months ago
RTÉ apologises for NYE sketch about the Catholic Church
9 months ago
QUIZ: Kneel or no kneel: How well do you know Mass?
1 year ago
Mary McAleese says Catholic Church's teachings on homosexuality are "intrinsically evil"
1 year ago
Study shows frequent changing of position at Mass can cause fainting
1 year ago
Church suspends sign of peace and empties holy water fonts due to coronavirus fears
Next Page