The Leaving Cert holiday is something of a rite of passage that nearly every Irish teenager has to go through.

Now plenty of people don't make their way to Magaluf or Santa Ponsa to celebrate finishing their secondary education, and they're as well for it, but those that do can end up having the experience of a lifetime.

END_OF_DOCUMENT_TOKEN_TO_BE_REPLACED

And as wildly brilliant as the holidays can be, it's also of the utmost importance that you stay safe. These types of holidays can be dangerous, as people tend to let loose and go a bit mad.

That's where your mammy comes in.

Anyone who's been on this type of holiday has almost definitely got a lecture off their mam or dad urging them to be as careful as possible, a lecture that lasts from the second you booked your flight to the second you stepped on the plane.

Some parents even send a daily "be safe" text, in the hopes that it will make some sort of a difference.

END_OF_DOCUMENT_TOKEN_TO_BE_REPLACED

And some parents go even further.

Mick Molloy from Gorey is setting off to Santa Ponsa on Monday. But before he left, he found a set of rules written by his mam in his suitcase.

And they are absolute gold.

The list includes "stick with your friends", and "have respect for yourself & others", which are rules that everyone should abide by. 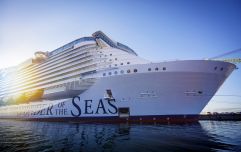 END_OF_DOCUMENT_TOKEN_TO_BE_REPLACED

Mick is also urged to "walk away from fights", and to "stay away from dodgy tattoo parlours". Not many people listen to that second one...

And most importantly to use condoms. That one got two stars beside it.

Thanks to Mick Molloy for sending this in. Got a story for JOE? Fill out our online form here.

popular
Amazon Prime Video has just added 38 very big movies to its library
Matt Lucas quits Great British Bake Off role
Ashton Kutcher opens up about rare disease that left him unable to see or walk
The start of the superhero takeover of Hollywood is among the movies on TV tonight
The Pogues’ Shane MacGowan rushed to hospital
Rotten Tomatoes reveals the best reviewed movie of 2022
Did you spot the explosive detail in the latest episode of The White Lotus?
You may also like
3 weeks ago
Ireland named as one of the winners at world travel ceremony
1 month ago
6 things to see and do along Sligo's Wild Atlantic Way this autumn
2 months ago
Airline offers passengers chance to book an empty seat next to them as well
3 months ago
Aer Lingus launches sale with fares starting from €150 for North American routes
3 months ago
New Irish website helps customers find cheapest flights to anywhere in the world
3 months ago
Two Air France pilots suspended after fistfight in cockpit following takeoff
Next Page