Irish whiskey breaks world record for most expensive at auction

The Irish are a people of many talents...

But among our most famous is our penchant for producing world class whiskey.

This wisdom was reaffirmed on September 10 when the first 100 bottles of Teeling Whiskey Celebratory Single Pot Still were sold online via Whisky Auctioneer. 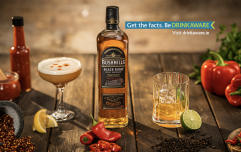 END_OF_DOCUMENT_TOKEN_TO_BE_REPLACED

Teeling fetched no less than £10,000 for the bottle (which amounts to €11,222). It was the highest price ever fetched by a whiskey from a new distillery. It is also the first release of whiskey distilled at Teeling’s Dublin site

The whiskey has been produced from a recipe of 50% un-malted barley and 50% malted barley. Distilled in 2015, the liquid has been matured for more than three years in ex-Muscat wine casks.

All profits made from the auction will be donated to charities around Dublin's Liberties, which is where the Teeling Distillery is based. The distillery has been on the scene since 2015.

6,000 bottles of the first batch are set for commercial release in November 2018.

popular
Amazon Prime Video has just quietly added 15 big movies to its library
QUIZ: Can you guess the pixelated album cover?
An unforgettable sci-fi film is among the movies on TV tonight
Gardaí issue update on investigation into murder of Sophie Toscan du Plantier
007 producers provide new update on Bond 26
Travis Barker rushed to hospital after tweeting "God save me"
Calls for €20 social welfare increase and minimum wage of €13 in new Budget
You may also like
1 month ago
World's largest bottle of whisky sold at auction for €1.29 million
2 years ago
Bushmills Irish Whiskey announces series of immersive live events on Instagram
2 years ago
A bottle of whiskey has sold for the record-breaking price of €1.7million
2 years ago
We asked an expert all about choosing the right whiskies for the right occasions
2 years ago
So apparently, edible whiskey 'tide pods' are now a thing
2 years ago
Cork-based whiskey wins title for the best whiskey in the world
Next Page