JOE's Eric Lalor caught up with stand-up comedian, author, broadcaster and columnist Colm O'Regan ahead of the Babytalk Festival in UCD on Feb 22nd and 23rd.

Colm O'Regan:  I should declare firstly, that my wife is one of the organisers of the event, so I couldn’t really turn it down. However, it was only after she had put it out to public tender, held an extensive interview process and didn’t receive any suitable applications, that she turned to me.

@Babytalkfest oh the Lord save us.

END_OF_DOCUMENT_TOKEN_TO_BE_REPLACED

JOE: Do you plan to have children?

COR: Yeah, eventually. So in effect, Irish Mammy will be married to an Irish mammy.

END_OF_DOCUMENT_TOKEN_TO_BE_REPLACED

JOE: You’re performing the Irish Mammies show on both days?

COR: I am indeed doing two performances, but they will be abridged versions of the show as the show in its entirety runs for 90 minutes. I plan to do about an hour of it as that’s the time slot given to me.

END_OF_DOCUMENT_TOKEN_TO_BE_REPLACED

JOE: You're not worried about kids being at the show and how they may distract you or God forbid, heckle?!

COR: Ah no, I imagine there will be kids there and if they get distressed or bored, I’ll just hand out some ethical sweets or something. I have done gigs before exclusively for children. I did one in Glasgow once and the lovely thing about kids is that they put up their hands when they want to talk. You can know when the heckle is coming, but you will never know what it will be of course.

A young kid put up his hand and I asked him if he had a question to which he succinctly replied  ‘Aye! Get a job!’  This kid had a 'butter wouldn't melt in his mouth' kind of face on him. His mother was suitably humoured and dead proud. I...less so. However, it’s helped me prepare for any ‘questions’ from the kids at my shows. 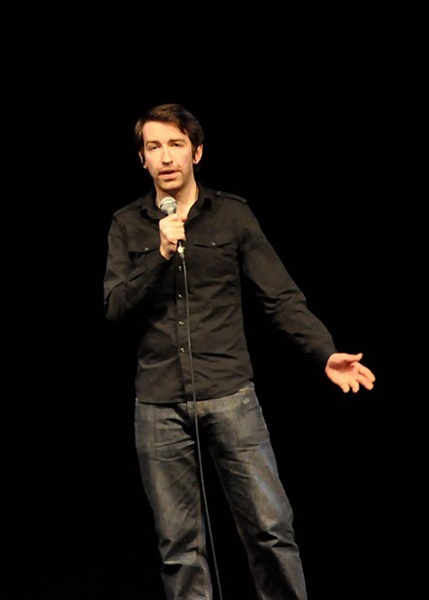 JOE: You don’t have kids, so what is it, apart from your missus being one of the organisers, that is interesting you about Babytalk?

COR: A lot of these big events and trade fairs are very ‘salesy’ where as this one is more about information for parents of all experience and for people who are thinking about having children. People who are planning on having kids are often bewildered about the prospect and see parenting as some sort of club.

This event caters for those people and also for parents who are on their ninth child; even grandparents will benefit from attending. I think the most important thing is to get the information you want that doesn't make you feel bad about asking the question. There’s face painting, story telling and children’s entertainers for the kids.

JOE: Irish Mammies is massive. How did it all start or at what point did you realise that you could be on to something with it?

COR: I obviously didn't initially plan for it to be as big as it has become. I created the Irish Mammies Twitter account because I liked the idea of a traditional mother with old school mannerisms embracing social media technology. It was slow to build. I didn't want to use the old chestnuts that we all know like ‘If you fall off that wall and break your legs, don’t come running to me’. That’s all been done and we all have heard it before, or I couldn't use the word ‘emersion’ as that’s a staple of the Des Bishop back catalogue of material.

I started off tweeting stuff that my mother would say to me as a child growing up. The overriding need mothers have to protect their kids from getting a cold. It’s a portrayal of the unique system of rules, etiquette and language used within the confines of the home. Twitter is such a great tool for editing. Basically, the shorter the tweet, the better the reaction. I decided to write a book, but didn't want to make it a ‘tips from mammy’ type of book. It’s more a book about the world viewed from the persona of an Irish Mammy.

JOE: Are you following your own mother around with a notebook recording everything she says?

COR: Initially, she was the inspiration, but quickly, it had evolved into this individual and took on a life of it’s own. I would watch out for interactions between parents and children. Obviously, at the moment, I don’t have children and it’s been a while since I was a small child, a whole year in fact!

You don’t sit there listening, but you might catch some dialogue when you walk by such as ‘If you don’t behave, you’re not getting your jelly tots’. It’s just jelly tots are always used when it comes to kids. When is the last time you bought jelly tots for yourself? The treat of a biscuit is still relevant today, it’s still an incentive to behave for kids. The first time you realise you are an adult is probably the time you are in the shop buying biscuits and nobody is telling you not to eat too much or what you can and cannot have. You go home and binge and generally feel awful after it. That’s because you've got no parent to tell you when to stop. I think parents should still parent until you are 40.

JOE: You’ve had two hugely successful books already. Are there any plans to release another?

COR: Plans are afoot for the third and final book. A nice trilogy culminating in the mother going to Mordor to destroy the evil E numbers. I also hope to release a book after that about the Irish man. Not necessarily the Irish daddy as a lot of the parental advice given by the Irish Mammy could easily come from the father and I don’t want to get repetitive.

I then want to write a Booker prize-winning book which will have to take place on a number of continents, goes back in time etc...Then I want to win an All-Ireland and also win The Voice, not going on that junket to Mars because I’ll need to be on earth for the World Cup in Brazil where I plan on coming on in the last minute to score the winning goal in the final.

JOE: You’re one of the best stand-ups in the country. Do you plan to do anything with the stand-up outside the realms of the Mammy stuff?

COR: I’m writing a new stand-up show which I’m hoping to put on at the Kilkenny Cat Laughs Festival this summer. I love being busy. Paying the mortgage is a great motivator to keep busy.

JOE: Great stuff Colm, all the best with that and with BabyFest too.

Colm O'Regan will be appearing at the Babytalk Festival in the O'Reilly Hall in UCD on Saturday Feb 22nd and Sunday Feb 23rd. For full lineup details click here

popular
Netflix has just added an incredibly tense 97-minute thriller
A great underseen action thriller is among the movies on TV tonight
The JOE Friday Pub Quiz: Week 307
An exciting Irish crime thriller is among the movies on TV tonight
Prime Video has just added 25 very big movies to its library
The 50 most iconic songs of all time* have been revealed
Thunderstorms and heavy rain to end Ireland's current heatwave
You may also like
4 weeks ago
Comedian Rhod Gilbert reveals he is undergoing cancer treatment
1 month ago
Celebrity Juice axed by ITV after 14 years as Keith Lemon pays tribute to "the longest most fun party"
2 months ago
One of the best sitcoms of recent years is finally available to watch in Ireland
3 months ago
Dave Chappelle attacked on stage during Netflix stand-up show in LA
3 months ago
Derry Girls creator admits she was nervous about some jokes in the new season
3 months ago
One of the best (and most important) stand-up comedy specials in years is now available to watch at home
Next Page