Last week’s JOE’s Oisin Collins was riding around in style in the incredibly luxurious Audi A8. Here’s a look at how he got on…

A few months ago I was invited to an Audi event out at Weston Aerodrome where we were given the chance to test out the Audi RS6 Avant and S3... on the runway. It was an experience I’ll never forget. However, there was something else at the event that was as memorable as tearing down a runway at 239kmh in an RS6 and that was the Audi A8. While we didn’t get to test-drive the A8 on that particular day, we did get to have a gander inside and at the time I remember thinking, 'this feels like a 5* hotel on wheels'. It was superb.

Fast forward a couple of months and here we are. Handing back the A8 felt like losing a loved one and all that I can hope for now is that Audi launches another new A8 in the not too distant future. Otherwise, I’ll probably be waiting awhile before I get the chance to drive another one. Unless I’ve a rich uncle who’s about to kick the bucket that I didn’t know of - fingers crossed. 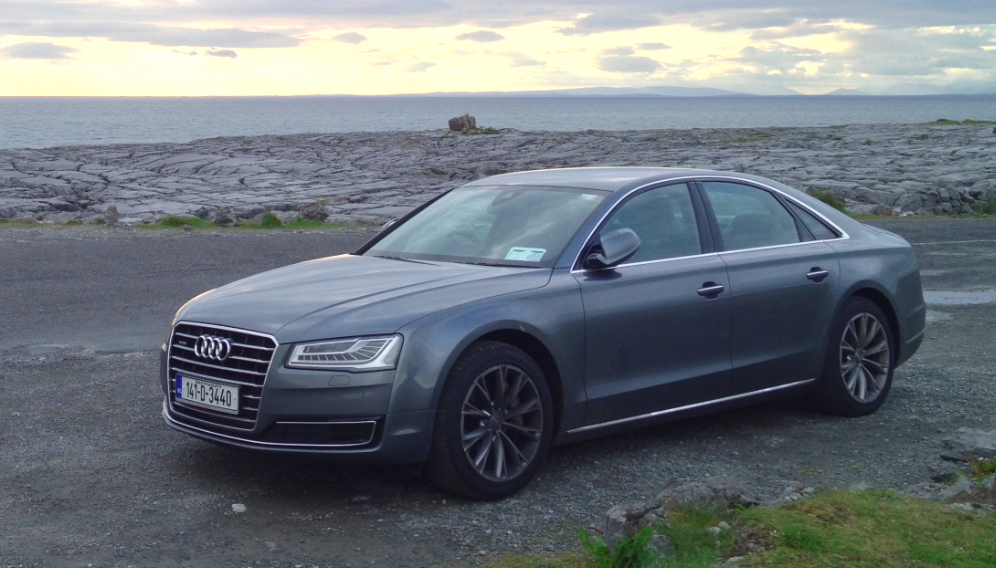 END_OF_DOCUMENT_TOKEN_TO_BE_REPLACED

Anyway, the car is absolutely stunning. I much prefer the A8 over it’s other German luxury competitors due to the fact that it looks quite subtle. It’s not obtrusive and in your face like some other high end makes and while it might not turn the heads of everyone, you will certainly notice people taking a second look when they realise it’s not an A6. One of the most aesthetically pleasing aspects of the car can be found low down on the rear bumper. The two wide exhaust pipes look extremely sleek and they were just one of the many, many features I loved about the A8.

The fully electric, heated front seats come lined in Valcona leather while the rest of the interior is fitted with solid walnut and brushed aluminium, giving you a nice and relaxed feel in a large and powerful motor. There’s plenty of space in the car for the driver and passengers alike and you won’t be stuck for storage space either. The boot opens automatically with just the touch of a button on the key, which comes in extremely handy when it’s lashing rain, or when you’ve got your hands full with shopping or golf bags. Passengers in the front and rear can also chose their own climate setting thanks to the Four Zone climate control option.

Audi’s entertainment system is also very easy to connect to and use and you can even play DVD’s via a multi-disk changer in the glove box. Rear passengers (and anyone else in the car) can also take advantage of the 230v socket in located in the rear if they need to charge a laptop or other electrical device.

The 3.0 TDi 260hp Quattro engine is extremely powerful and you would hardly even notice yourself doing 140kmh on a motorway, as the ride is just so smooth, comfortable and quiet. So it’s best to have the digital speed display up on the dash just to be safe. The A8 will do 0-100kmh in just 5.9 seconds and it has a top speed of 250kmh. Emissions come in at 155g per km, which puts the car in Tax Band C costing owners €390 in tax per year. However, that’s pocket change to anyone who can afford the €93,280 price tag in the first place.

END_OF_DOCUMENT_TOKEN_TO_BE_REPLACED

Economy-wise, the car exceeded my expectations. It’s not everyday that you get to sit behind the wheel of a €93,280 luxury vehicle, so I decided to take a spin to the opposite side of the country to see the Cliffs of Moher (I’m ashamed to say it was my first time seeing them in person). I drove the car in and out of work from Monday to Friday and then took the long spin down to Co. Clare on Saturday and I only had to put diesel into the car on Sunday morning.

All in all, the A8 was undoubtedly one of the best cars that I’ve ever driven – 5/5. The only way to make it better would to be to add the massage seats option and maybe the 360-degree camera, which just has to be seen to be believed. Other than that, I’d happily drive around in the 2014 A8 3.0 TDi 260hp Quattro for the rest of my driving days…

For more info on the Audi A8 and the rest of the Auid range check out the Audi Ireland website.

popular
Amazon Prime Video has quietly added 18 big releases to its library
Man charged in connection with the murder of Ashling Murphy
WATCH: This foul-mouthed argument proves the Irish language is alive and well
60 jobs available on Stena Line with 50% of your time spent not working
QUIZ: We bet you can't name all of these countries from their outlines
Marvel actor Gaspard Ulliel passes away aged 37 in ski accident
A gripping '90s thriller is among the movies on TV tonight
You may also like
3 weeks ago
QUIZ: Can you guess the meanings of all these dash symbols from your car?
1 month ago
These were the most viewed cars in Ireland
4 months ago
QUIZ: How well do you know your car logos?
7 months ago
The ultimate checklist of everything you need for your next Irish road trip
8 months ago
The iconic 'Bus W***ers' car from Inbetweeners is now up for sale
9 months ago
Two killed after Tesla car crashes with no one in driver's seat
Next Page