Why is it a classic? : It's difficult to discuss the wonderful debut of New Order without mentioning the tragic end of Joy Division and the sad passing of their gifted singer, Ian Curtis.

Ceremony was one of the last Joy Division songs that was ever composed, the version of the track on their album Heart and Soul was recorded just four days before Curtis's suicide, so the song must have carried a hefty emotional weight on the surviving members of the band when they went into the studio.

The track could almost be described as an anthemic yet cathartic bridge because it incorporates some of the unique traits that made Joy Division so beloved while also signposting elements of what New Order would come to define.

Peter Hook's bassline shines through as does Sumner's reverbed lead guitar with those two implied chords, C major and F major, prominent throughout.

I'd argue that the songs main quality lies in its subtle ability to switch between the quiet/loud/quiet dynamic. Note that the guitar only becomes more prominent and noticeable during the songs more subtle moments.

What makes Ceremony so timeless is that the song feels like it's an empty vessel. What do I mean by this? 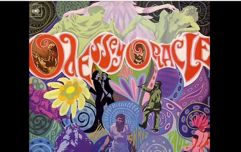 JOE's Classic Song of the Day : The Zombies - Time of the Season

END_OF_DOCUMENT_TOKEN_TO_BE_REPLACED

Well, the poignant lyrics almost take a backseat when measured against the overall atmosphere on the track, plus you can project any mood onto it.

The song is equally adept at filling the dancefloor on a Saturday night in an indie club as it would be soundtracking those quiet moments of personal reflection when it's just you and your earphones.

The lyrical hook: "All she ask's the strength to hold me, Then again the same old story."

Did you know? : Sumner had to put the Joy Division recording of the track, as sung by Curtis, through a graphic equalizer to transcribe the lyrics.