“Will I tell you a story about Johnny Magory?”

END_OF_DOCUMENT_TOKEN_TO_BE_REPLACED

The brief tale of Johnny Magory is one known to generations of Irish people and it will continue to be known by generations to come if a series of new children's books from an Irish author have the desired impact.

Inspired by Magory, Kildare-based author Emma-Jane Leeson is bringing the fabled character to life through a series of books, forthcoming journals for parents and children, merchandise, interactive outdoor events and eventual animation series.

First up is a new book titled Johnny Magory and the Forest Fleadh Cheoil, which is due for release next month and is illustrated by none other than Don Conroy.

It will be part of a series of children’s books under the Johnny Magory moniker, the idea for which all came about when Leeson created Johnny Magory Business at the tail end of last year.

END_OF_DOCUMENT_TOKEN_TO_BE_REPLACED

A bout of sickness and a desire to change her lifestyle to suit the needs of her young family prompted her to set up the business, which has made waves in entrepreneurial circles in the last six months.

By her own admission, Emma-Jane is on a mission to transform her series of books into the Irish children’s brand for all things outdoors, nature and wild and ultimately wants Johnny Magory to become the Irish equivalent of Dora The Explorer, to educate children across the globe on Irish heritage and wildlife.

“I had the best childhood ever,” Leeson says.

“Always outside, mucked up to the eyeballs and having adventures. Every night at bedtime Mammy would read us a book and then Daddy would tell us a story about Johnny Magory. 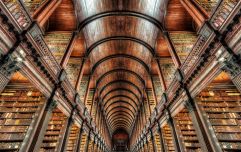 END_OF_DOCUMENT_TOKEN_TO_BE_REPLACED

“The story was always just an exaggerated version of whatever we had done that day peppered with talking animals and trees. We always thought that he was a real person and couldn’t wait for him to tell us what the bold boy had done that day.”

Commenting on the success of her business so far, she added: “It’s been a rollercoaster! I really couldn’t have dreamed any of this would be possible this time last year. The people I’ve met and places I’ve been so far have just been incredible.

“I can’t believe I’ve a new book coming soon with Don Conroy illustrating and a trip to Boston to boot on a Trade Mission with Enterprise Ireland. Really, it’s just a dream come true, I’m so grateful for it. And let’s be honest, I’m thriving in all the madness.”

Johnny Magory and the Forest Fleadh Cheoil will be available from October 2019 from JohnnyMagory.com.

popular
Amazon Prime Video has just added 21 big movies to its library
Shock as blues singer beats Adele, Beyonce and Taylor Swift to win Song of the Year Grammy
One of the most underrated crime thrillers of recent years is among the movies on TV tonight
Ben Affleck's bored expression at the Grammys becomes a meme
5 years ago, Hollywood took a massive gamble on a huge sequel... and lost big time
One of the best crime thrillers ever is among the movies on TV tonight
QUIZ: JOE's Big News Of The Day Quiz #41
You may also like
4 months ago
Graham Norton reveals the one celebrity he'd love to have interviewed
4 months ago
Graham Norton has a new answer for the worst guest he's ever had on his show
11 months ago
WATCH: The trailer for Conversations with Friends is finally here
1 year ago
Irish writer nominated for Sunday Times Young Writer Award
1 year ago
Chapters Bookstore to close after 40 years of business
3 years ago
"I was really guarding Room from becoming a bad film" - Emma Donoghue on bringing her novel to the big screen
Next Page