He's from Dublin and has black hair. Know anyone that fits the description?

With Valentine's Day fast approaching, we're feeling slightly romantic in the JOE office and on that note, we're doing our very best to reunite a Kerry woman named Ciara with 'the man of her dreams.'

Ok, let's rewind the clock and got through the details.

Last November, this would-be couple really hit it off when they attended the Hi Style awards at the Clayton Hotel Silver Springs, Cork.

Apparently, this fella made quite the impression and Ciara is looking to track him down.

In her own words, "got chatting to a guy afterwards in the Residents Bar and spent the night chatting to him. He was there with a group of friends on a business trip, I think.

"Long story short, all I know about him is that he’s from Dublin. I was absolutely flaming and couldn’t even remember his name the following day! So, at work this week, I received a fabulous Christmas card from him that had been delivered Christmas week (that’s another story). He was able to trace my workplace to Glamour in Listowel, Co. Kerry but I wasn’t 100% sure if it was the right Ciara (so I’m presuming that’s the reason he didn’t leave any contact details on it).

"He left a lovely note on it but I still can’t make out his name."

END_OF_DOCUMENT_TOKEN_TO_BE_REPLACED

As you can see below, the note from the gentleman is very thoughtful.

Ciara states that this Dubliner "was tall - well over 6ft - and that he had a beard and black hair."

If you happen to know this gentleman, Ciara would like to thank him for the lovely card.

Here's hoping that they get a second chance to meet. 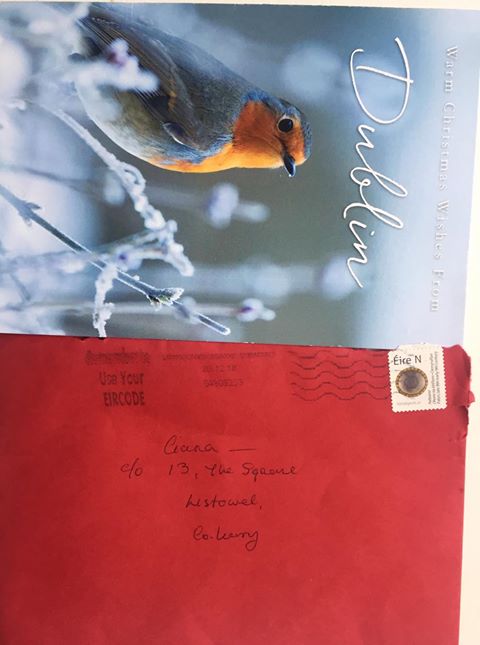 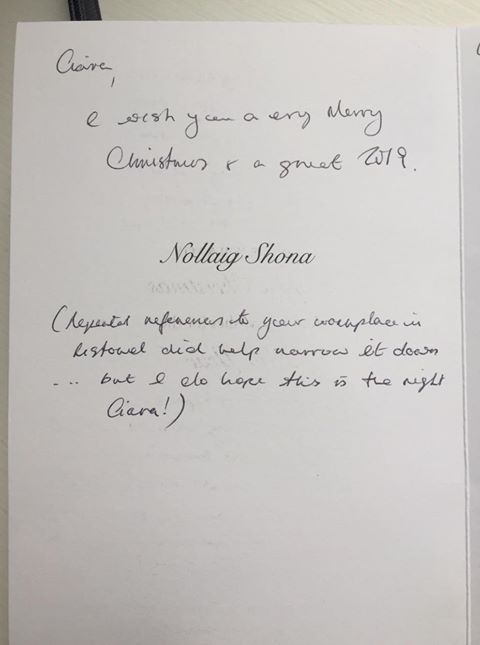 
popular
Here are Ireland’s favourite takeaways, as per the National Takeaway Awards
Met Éireann forecasts risk of sleet and possibly snow in parts of Ireland this weekend
TG4 to air a documentary on Ireland's homeless crisis this evening
QUIZ: Week 16 of JOE's 19 in 90 quickfire quiz is here
Here are the 6 best movies on TV this evening
Terry Jones from Monty Python has died, aged 77
Maria Bailey has announced she will not run in the general election
You may also like
20 hours ago
10 must-see movies at the 2020 Dublin Film Festival
1 day ago
Man arrested after threatening Gardaí with knife and stealing cash in Dublin
2 days ago
Two men left in serious condition after ingesting "unknown substance" in Dublin
6 days ago
A homeless woman in her 20s has died in a Dublin hostel
6 days ago
Road closures to remain in place on Thursday morning due to farmer protest
6 days ago
Eoghan Murphy "saddened" by serious injuries to homeless man, removes campaign posters from scene
Next Page