It makes so much sense.

KFC is launching its own take on the Irish classic, the chicken fillet roll, for a limited time only in Ireland.

The chicken chain will be rolling out two variations on the KFC Chicken Fillet Roll from next week. 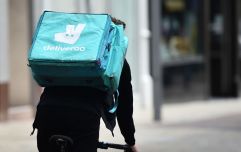 END_OF_DOCUMENT_TOKEN_TO_BE_REPLACED

The Original version will include KFC's Original Recipe chicken, cheese, black pepper mayo and lettuce all in a baguette.

For those who like their food a tad hotter, however, there will also be a Zinger Chicken Fillet Roll on offer, featuring in a baguette KFC's Zinger fried chicken, cheese, the chain's spicy supercharger sauce and lettuce.

In a statement, the chicken chain said of their first Irish-only menu item: "I mean a KFC Chicken Fillet Roll… it just makes sense, doesn’t it?

"We’re the chicken experts and the chicken fillet roll is Ireland’s favourite chicken dish. It’s honestly surprising we haven’t done it before."

It will be available in stores, in drive-thrus or by delivery.

The Big Reviewski || JOE · The Big Reviewski with Y: The Last Man, that Malignant ending & a secret streaming service
popular
The JOE Friday Pub Quiz: Week 261
"Variable speed limits" to be introduced on the M50 in the coming weeks
Copper Face Jacks sets reopening date after being closed for 18 months
Employers cannot ask staff to reveal their vaccination status, confirms Government
Miriam O'Callaghan had no patience for Stephen Donnelly's "gibberish" on Prime Time
Michael D Higgins cites "political statement" in decision to turn down Armagh ceremony invitation
One of the better Liam Neeson action romps is among the movies on TV tonight
You may also like
3 weeks ago
New Dublin restaurant is giving away free meals to its first 100 customers
1 month ago
The best burger in Ireland has been revealed ahead of National Burger Day
1 month ago
Galway restaurant The Dough Bros named best pizza takeaway in Europe
1 month ago
Buffets and carveries permitted under new indoor hospitality guidance
1 month ago
The hunt is on for Ireland's best burger and it's up to the public to decide
1 month ago
QUIZ: How well do you know your ice-creams?
Next Page