It was one of the best shows in years.

To a lot of people, the Christmas period truly begins once The Late Late Toy Show arrives on our screens.

After all, what could get you in the holiday spirit more than Ryan Tubridy dealing with dozens of hyper/nervous children as he tries to make sure all of the toys work?

But whatever you think of Tubs, or The Late Late Toy Show in general, you have to admit that this year's show really was a good'un.

This year's theme was supposed to be based around the Frozen movies, but if you ask us, the theme for this year was actually Making Us All Cry Like Babies.

So there was Lee and his family who were reunited with their sister who moved to Australia three years ago. Just look at how much it means to them:

Then we had the incredibly brave Sophia, who spoke about her experiences of bullying, while reassuring us that "life would just suck if we were all the same". Spot on.

"Don't let the bullies stop you from doing the things that you want to do".#LateLateToyShow pic.twitter.com/8N7WXSlths 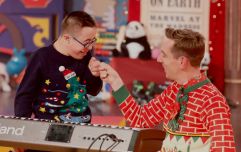 END_OF_DOCUMENT_TOKEN_TO_BE_REPLACED

If you're not tearing up already, we're equally impressed and worried by you.

Another beautiful moment was when Sophie made her way to the stage, to talk about her brother Cian, who is in Crumlin Hospital with Leukemia.

After giving her and her family some cool prizes, Tubridy beautifully told Sophie that "if I was Cian, I'd want a big sister like you".

"If I was Cian, I'd want a big sister like you". #LateLateToyShow pic.twitter.com/BWf7dB2odS

And the celebrity guests didn't disappoint either. First up was golfing hero Shane Lowry:

Next was the legendary Katie Tayor:

And WHO could forget Tom and his nanny Pat?

And there was plenty more highlights that we haven't even touched on. If we're being completely honest, it was a great show from start to finish.

The Late Late Toy Show will air again on RTÉ 1 at 2pm on Saturday.


popular
Downton Abbey creator confirms plans to start work on a sequel
The 50 most iconic songs of all time* have been revealed
Louis Walsh explains why he grabbed Mel B's backside on television
QUIZ: How many of these Recess characters can you name?
WATCH: Trailer released for CG remake of Pokémon: Mewtwo Strikes Back
QUIZ: How many of these characters from Breaking Bad can you name?
Disney+ has brought forward its launch date in Ireland and confirmed its price
You may also like
1 month ago
'I wanted more goof': Ryan Tubridy on the inspiration behind this year's Late Late Toy Show theme
1 month ago
Ryan Tubridy shares details of Gay Byrne tribute on tonight's Late Late Toy Show
1 year ago
The Late Late Toy Show was the most watched show of the year for Irish audiences
1 year ago
WATCH: This young trad group from last night's Toy Show are going to be stars
1 year ago
WATCH: The heartwarming moment featuring a boy who saved his cousin's life was the highlight of the Toy Show
1 year ago
Michael meeting his hero Davy Fitz is what the Toy Show is all about
Next Page