The prolific Scottish comedian on intrusive thoughts, mental health and keeping it real onstage and off.

Have you ever had a particularly terrible idea bounce into your head out of nowhere?

Perhaps you're walking over a bridge and something tells you to throw your phone into the river, or maybe some other, significantly darker form of self-sabotage.

END_OF_DOCUMENT_TOKEN_TO_BE_REPLACED

Such intrusive thoughts are quite common, as it turns out. Scottish comedian Limmy - Brian Limond to friends, family and the tax man - is prone to them.

"Standing in front of the traffic lights and a lorry is going by and you think, ‘What if I just kick that person out in front of it?’ Just something horrible. It’s the sort of thing that if you’re a wee boy, you get these thoughts and you just do it. And then as you get older, you don’t do it, but you think it, so you jump on something like Grand Theft Auto and just do it there."

The French even have a specific term for it. L’appel du Vide - The Call of the Void.

END_OF_DOCUMENT_TOKEN_TO_BE_REPLACED

"Oh, that’s good," Limmy nods. "That’s like being on top of a building or next to a cliff and thinking ‘What if I just jumped?’ There’s another French thing, something to do with the stairs, there’s a phrase about when you think, ‘Oh I should have said this thing to that person’ during an argument and about five minutes later, after you’ve left, you think of a cracking line that would have shut them up.

"There’s a French saying for that, something to do with being on your way out of that place, going down the stairs and suddenly thinking of the right thing to say. That void one is a cracker, though, I do that all the time." 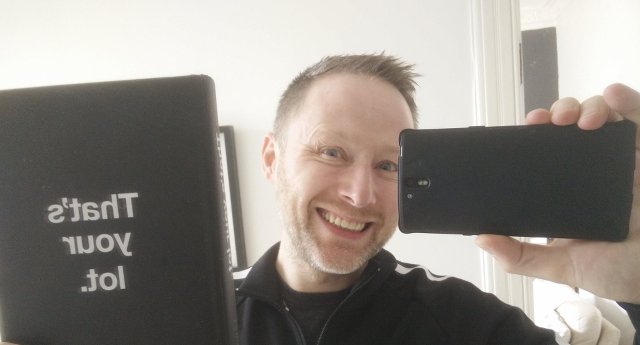 END_OF_DOCUMENT_TOKEN_TO_BE_REPLACED

He's thinking of ‘L’esprit de L’escalier’ or 'Staircase Wit'. They built a Seinfeld plotline out of it once, where the ever-hapless George Costanza flies across the country in order to deliver the supposedly perfect retort to a rival colleague. Limmy saw that one, but it didn't impress him all that much.

"Yeah, it wasn’t as good as I thought it was going to be," he says. "I love that there’s a phrase for it, though. I love those sorts of things. I think intrusive thoughts are very important if you like making dark stuff. I can imagine that Stephen King gets it all the time. I don’t think that you can create stuff like that unless you have these thoughts popping into your mind that almost don’t seem like you."

He admits that he's drawn to darkness. His favourite horror film is The Texas Chain Saw Massacre (1974 original, of course) and though he'll try to crowbar in some idyllic childhood musings to his currently in-the-works autobiography, the murkier aspects seem unavoidable.

Limmy has been frank about his own struggles with mental health. One wonders if something of a curse goes hand in hand with creativity.

"Maybe, maybe," he considers. "During 2013, I went on anti-depressants for the first time in my life. I had been kind of suicidal for years and I went on these anti-depressants for, I don’t know how long, either a year or for six months. I came off them and I’ve not been on them since. At the time, I was just… happy. I wasn’t delirious, but I wasn’t feeling low, I wasn’t overthinking things and worrying about what would happen if I go to this place and so on. I wasn’t doing that.

"Some people would say, and I thought this as well; being happy, or being content, is that not getting in the way of your creativity? Do you need this kind of pain, or some sort of annoyance, to be able to make stuff? But I made pretty much all of the Vines for this new tour while I was on the anti-depressants. There’s nothing I did in those Vines that I wouldn’t have done when off the pills."

He notes that anti-depressant medication isn't for everyone, and now that he's no longer taking any, he keeps boredom and restlessness in check with video games and other distractions. He takes a moment to weigh up the difficult, sometimes exhausting nature of creation.

"There’s something about writing or anything creative where you can go through a long period of not being able to do your job, a creative block or doubting yourself and thinking, ‘Is this any good?’ It’s not the same if you’re a plumber; you’re going to get up and do your job that day. There might be a problem with the pipes or something has gone a bit awry, some kind of leak and you don’t know where it is, but you don’t spend a whole week, or a whole month, where you cannot remember how to do your job. ‘How am I going to earn any money?’

"And you’re not thinking to yourself, ‘I don’t know if this plumbing is going to go well, I don’t think this is some of my best work’ and you’re beating yourself up and you’re wondering how the reviews are going to be. You don’t care, you know where it is. It’s fixed, it’s right in front of you and it’s done. Writing and certain creative things can lead to mental health problems because it just feels terrible. A lot of people don’t like writing, they don’t like making stuff, but they feel like it’s the only thing that they’re good at."

There can also be the feeling that you're just shouting into a void.

"I think one thing can lead to another," Limmy offers. "A certain personality type can lead you into making things, or making things can lead you into a certain mental illness. I think that one seems to go with the other, but maybe not for everyone. I’m sure there are lots of writers who are nice and happy. I mentioned Stephen King, he’s a recovering alcoholic. Certainly, with me, I couldn’t do what I do if, and this might be a bit politically incorrect, but I couldn’t do what I do if I wasn’t a wee bit off my nut. Not in the mental health sense, but something else."

Despite the dark streak in his humour, Limmy doesn't necessarily consider himself one of the more shocking comedians around. He appreciates a need for sensitivity when time, place and people call for it. He highlights the physical nature of comedy, the intimacy that can get lost, for better or worse, when you're not in a room with someone.

Towards the end of our conversation, he recalls a line that he once came up with that struck him as maybe, possibly, somewhat profound.

Limmy is known, amongst other things, for being fiercely prolific; whether it's using his Twitter account to regularly inform the public of a relatively obscure Daft Punk banger, apply a uniform anecdote to a fallen celebrity or casually announce that he's Scotland's answer to Beyoncé. At least one of those is a joke, he hastens to add.

Further evidence of a busy imagination comes in the form of his Vines Tour, which hits Dublin's Vicar Street at the start of next month. There, Limmy will play host to an hour's worth of his six-second-long heroics captured on the now-defunct platform, followed by a good old-fashioned audience Q&A.

"The strange thing that sometimes happens is you get almost the exact same questions from random people from one night to the other," he begins. "‘Who’s your favourite character to play on Limmy’s Show?’ and I’ll say it’s DeeDee because I can just sort of lie on the couch and do nothing and it’s nice and relaxing.

"The answer will last about a minute and that’s grand. But then the next night in the same venue, it’s a different person but the exact same question. And I feel like changing my answer and doing something different because this isn’t scripted, it’s off the top of my head, but I feel compelled to give a different answer, almost just for the staff who were there the night before.

"But I can’t, because I’m telling the truth, so I say DeeDee and the thing about the couch and I feel like the staff must be like, ‘Wait a minute, he’s got plants in the audience!’ but I have to tell the truth, even if it’s three nights in a row."

Limmy was in conversation with JOE ahead of his Vines Tour headliner at Vicar Street, Dublin on Wednesday 2 May.

popular
Met Éireann issues weather warning for three counties
QUIZ: Can you conquer this delightfully difficult General Knowledge Quiz?
QUIZ: Take your very best shot in this tough General Knowledge Quiz
The JOE Movie Quiz: Week 160
An underrated Jason Statham thriller is among the movies on TV tonight
A feel-good comedy with a Springsteen soundtrack is among the movies on TV
QUIZ: Can you name all of these countries just from one of their cities?
You may also like
3 weeks ago
One of the best sitcoms of recent years is finally available to watch in Ireland
1 month ago
Dave Chappelle attacked on stage during Netflix stand-up show in LA
2 months ago
Derry Girls creator admits she was nervous about some jokes in the new season
2 months ago
One of the best (and most important) stand-up comedy specials in years is now available to watch at home
2 months ago
Some of the very best TV comedies of all time have just been added for home streaming
2 months ago
Chris Rock finally makes jokes about Will Smith's Oscar slap
Next Page