Michael O'Leary has launched another scathing attack on the Luas drivers

He pulls no punches when talking about Ireland's transport system.

Ryanair chief Michael O’Leary has once again described the Luas drivers as “lunatics” and “headbangers” following their dispute with the Luas operator, Transdev, over pay. Speaking on Newstalk's Down To Business about the Luas strike, he says that those drivers on strike have decided to "vote away their jobs" and that they should be replaced by "schoolkids".

"It takes about five minutes to train a Luas driver. There's a button, you go left. A button, you go right, and that's all it takes to drive a Luas train", he adds. 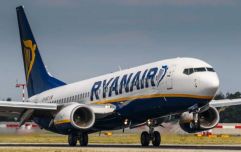 END_OF_DOCUMENT_TOKEN_TO_BE_REPLACED

Regarding the strike, O'Leary says, "You look at the mess of the Luas strikes, where you have a couple of headbangers hanging out for 50% pay increase".

The Mullingar entrepreneur also had some scathing words for the government's involvement in transportation companies, arguing that companies like Dublin Bus and Bus Éireann should be privatised.

House of Rugby Ireland · Quinn Roux on finding a home in Ireland and Mike McCarthy brings the absolute HEAT!
popular
Holly Willoughby criticises influencer for travelling to Dubai during pandemic
Lidl to open six new stores and create 1,200 jobs in Ireland over the next year
QUIZ: Can you name all of these countries just from one of their cities?
New Zealand set to close its borders for the entirety of 2021
Leo Varadkar says if Ireland introduced mandatory hotel quarantine, it would have to do so for a year
Here are the best movies on TV tonight
The 50 most iconic songs of all time* have been revealed
You may also like
4 hours ago
Ryanair extends €0 change fee for all bookings before 31 March
1 month ago
Ryanair announces two last-minute rescue flights for eligible Irish citizens stranded in the UK on Christmas Eve
1 month ago
Ryanair announces two additional rescue flights for eligible Irish citizens stranded in the UK
1 month ago
Ryanair to operate rescue flight for eligible Irish citizens stranded in the UK
2 months ago
Ryanair calls on Leo Varadkar to confirm support for new EU travel system following comments on Christmas flights
2 months ago
Ryanair suspending flights from all regional airports in Ireland for one month
Next Page