This is quite the accolade.

Belfast and the Giant's Causeway Coast have been named the Number One Region in the world to visit next year by Lonely Planet in their upcoming Best Of Travel 2018 guide.

The city and attraction beat out stiff competition from the likes of Alaska, the Languedoc-Roussillon region in France and the Aeolian islands in Italy.

In the Lonely Planet's Best Of Travel 2018 guide, they describe Belfast as "full of hip neighbourhoods that burst with bars, restaurants and venues to suit all tastes. The rusting old docklands are now the vibrant Titanic Quarter, home to fancy apartments and a sensational museum”.

The city shared the accolade with the Causeway Coast, which the publication describes as possessing "timeless beauty and high-grade distractions – golf, whiskey and some of the world's most famous rocks – are more popular now than ever”. 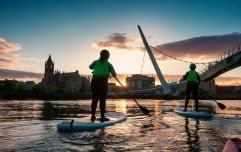 WATCH: Where we went on our weekend away in Northern Ireland

END_OF_DOCUMENT_TOKEN_TO_BE_REPLACED

Niall Gibbons, the CEO of Tourism Ireland, said: “The inclusion of Belfast and the Causeway Coast as the Number One Region in the world in Lonely Planet’s Best in Travel 2018 is wonderful news and will surely help to inspire travellers everywhere to put Northern Ireland on their holiday wish-list for next year."

"It is another well-deserved accolade, which provides Tourism Ireland with a great hook to continue to promote Belfast and the Causeway Coast around the world as a ‘must visit’ destination.”

We imagine that'll mean a few more folk taking the nearby Game Of Thrones tour...


popular
Ten Chinese cities locked down and Beijing celebrations scrapped as Wuhan virus death toll rises
The lineup for this week's Late Late Show has been revealed
QUIZ: Can you guess the pixellated movie posters?
QUIZ: Can you name all these European countries just from their vowels?
QUIZ: How many of these Recess characters can you name?
Met Éireann says there's a risk of snow for parts of Ireland this weekend
Man being treated for suspected case of coronavirus in Belfast
You may also like
2 days ago
WATCH: Peter Dinklage pays tribute to Northern Ireland in SAG acceptance speech
2 days ago
Seven arrested in largest ever money laundering investigation in Northern Ireland
1 week ago
COMPETITION: Win free tickets to Titanic Belfast for yourself and a mate
1 week ago
Sinn Féin backs deal to restore power-sharing in Stormont
2 weeks ago
British and Irish governments publish draft deal with aim to restore power sharing in Northern Ireland
1 month ago
Northern Ireland now has more Nationalist than Unionist MPs for the first time
Next Page