"Look 'em in the eye and embrace your fears." The terror of my first ever stand-up gig

The longest five minutes of my life.

"Look ‘em in the eye and embrace your fears."

No, not the advice that was given to a young conscripted soldier before he’s sent to the frontline, but the advice I received before I did my very first stand-up comedy gig.

END_OF_DOCUMENT_TOKEN_TO_BE_REPLACED

Some would argue the premise is the same. Walking out on that stage for the first time was like being sent to the frontline and hoping not to die.

Of course, at the risk of offending proper military folk, it’s nowhere near as dangerous and when I say 'death' I mean the potential death of your soul or your ego, your fragile, fragile ego. 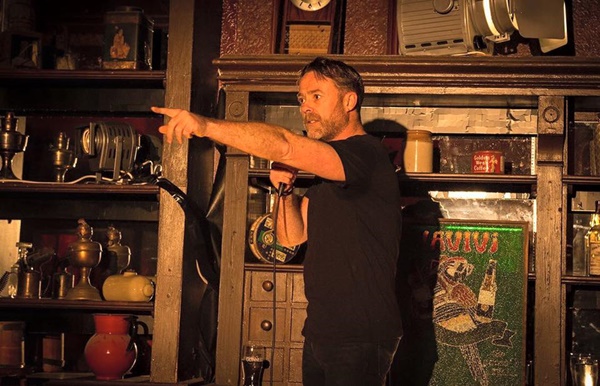 Back in 2005, I applied for some stand-up comedy workshops that were taking place in the Axis Arts Centre in Ballymun. People told me I was funny. What did they mean by that? Funny like a clown? Did I speak funny? Did I amuse them? What did they mean, I was 'funny'? Ahem.

END_OF_DOCUMENT_TOKEN_TO_BE_REPLACED

They said I should take up comedy, but I had no idea how you would ever start out as a stand-up comedian. I felt this workshop would at least inform me of that, which is why I applied. Nothing ventured, nothing gained and all that.

It quickly transpired that the poster advertising the workshops was merely a guise for something a lot more interesting. True, the workshops would be going ahead, but they’d be part of a new TV show from Des Bishop called Des Bishop’s Joy In The Hood. 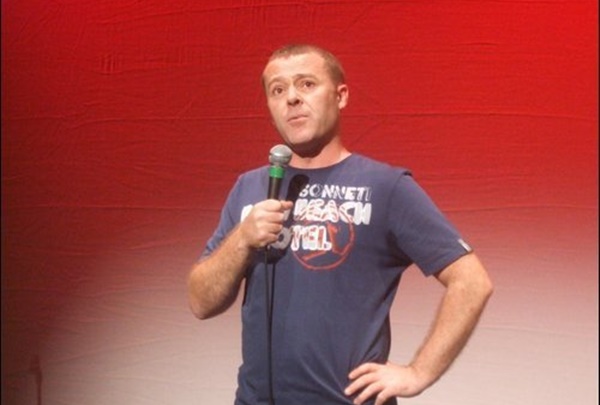 Des would be the facilitator of these workshops and he hoped to unearth new comedic talent in various disadvantaged areas around Ireland, which is why he was in Ballymun. I went along for the audition/interview and, luckily enough, a week later, I got the call from the producers to say they’d like to offer me a part on the show.

END_OF_DOCUMENT_TOKEN_TO_BE_REPLACED

The whole goal of the workshops was to prepare us for a five-minute stand-up gig live in front of our own local community, in the Axis Arts Centre itself. Des advised us of the dos and don’ts of stand-up comedy. How to construct jokes, routines etc.

It was tough going. Every second night for nearly three weeks, we met for a couple of hours, work-shopping our routines in order to do a five-minute set on stage in front of a full audience. 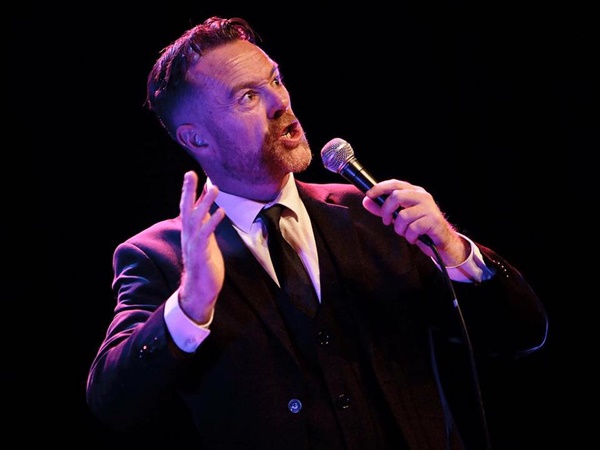 Five minutes doesn’t sound like much, but when you are starting out and have never been on stage before, it’s a hell of a long time outside your comfort zone. Nowhere to hide, nowhere to run. Just you and the audience.

There was great excitement in Ballymun on the day of the gig. It had completely sold out and once word had spread that a few newbies were going to give it a go with Des as MC, the tickets flew out the door.

I woke up in a bit of a cold sweat if I’m honest. Sure, the idea of being a comedian was nice and exciting, but to actually get up there on stage in front of a crowd and try and entertain them was another kettle of fish altogether. As an aside, who puts fish in a kettle? I digress.

We arrived at the venue a few hours before showtime and you could sense the nerves and dread amongst the group. There was no turning back now. Of course, we smiled and joked, but it was really just a mask to the sheer terror that was enveloping each and every one of us. 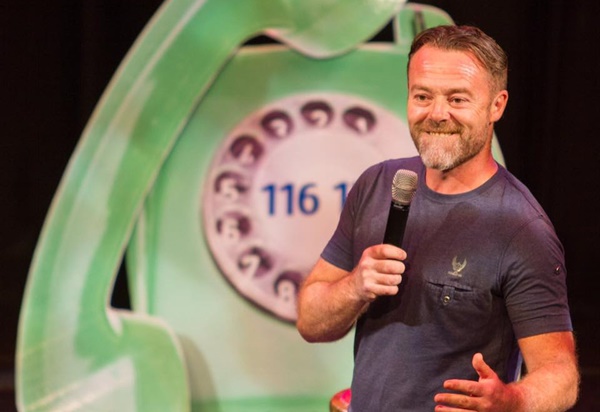 I looked over the stuff I had written. I had practised it in the mirror with a brush as any aspiring pop star would do and I had timed it. It came in roughly just under the five-minute mark if done at the pace I had been doing it at.

Des said to factor in the audience laughter as time too. Audience laughter? I felt that was a little optimistic, so I stuck to the five minutes I had timed myself too and if they laughed, bonus!

I went home for an hour to shower and get into my comedy gear. How are you supposed to dress as a comedian? First impressions last so I thought I should at least try and look well and then people could say, ‘Yeah yer man Eric was crap, but he looked sharp enough in fairness’. I stuck on a shirt and wore my good jeans. They were good at the time in 2005. Looked smooth enough. Even me Ma thought so. Actually, maybe on reflection, only me Ma thought so.

The show was to begin at 8pm on the dot and by the time 7.45 came around, the theatre was packed to the rafters with a full house. We stood backstage listening to the chitter chatter of the sitting audience trying to somehow work out if they’d be a receptive audience by the tone of their chat.

Inane stuff I know, but we were all new and we were trying to cling on to anything remotely positive. There were seven of us in total, so the split was four in the first half and three in the second half. I was selected to close the first half, so I was fourth. 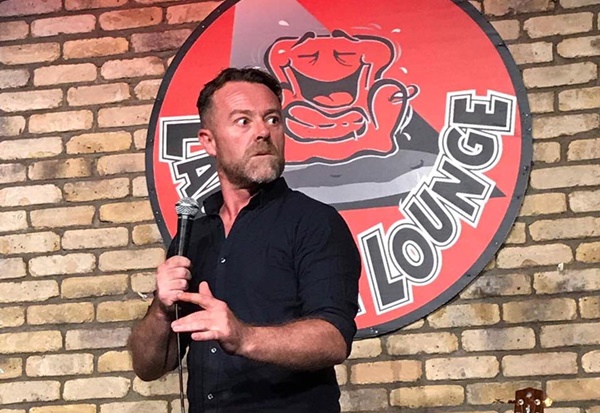 The show kicked off and of course, Des, being the consummate pro, had them eating out of his hand and had them in raptures. We all watched from the wings, like lambs to the slaughter, a group of condemned people awaiting our turn to be walked to the gallows.

I watched the first lad do his bit. He did well and I quickly realised that the crowd were there to support us, not judge us. Hallelujah! Did that calm the nerves? No, not one bit.

I paced up and down backstage pretending to be confident, telling the others I was looking forward to it, but no, I was dreading it. My family were there and a lot of friends too, so I didn’t want to be the one who stank the place out.

I checked my phone and there were some good luck messages from the family and, of course, cruel ones from my friends. One message read: ‘Don’t f**k it up!’ Friends, eh?

My palms were sweaty, knees weak, arms were heavy, but thankfully, my Mam is a decent cook so no vomit on my sweater from the cooked spaghetti.

I knew the third act was almost done, so my time had come. This was it. Des was telling the crowd he was about to bring the last act on before the interval. I tried to focus and, for a terrifying couple of seconds, my mind went absolutely blank and I tried to remember my opening line.

It came to me and I breathed a huge sigh of relief. Des announced my name and I walked out there to huge applause, but couldn’t really see the crowd as I was blinded by the spotlight. I remembered to smile, to try and appear confident.

I said my opening line and it got a laugh. I kept going. The crowd laughed and applauded. I got excited and probably rushed along at a rate of knots, but I was enjoying it now. Felt like I had been on for about an hour, but in reality, I had done four minutes and 38 seconds.

I got a huge ovation. I was ecstatic. It didn’t matter that they were a very supportive crowd. I hadn’t died or choked, I had completed my very first gig and I was hooked.

There is a copy of that episode up on Youtube and you can see a brief section of my set from 3.37 onwards. Viewer discretion should be advised as I am wearing the most boot-leggy of boot-leg jeans known to mankind.

It’s not for everyone and the gig that night proved to be the last one ever performed by some of the participants, but at least they can look back and say that they gave it a shot, no regrets.

It never really goes away, you just get better at dealing with it.

popular
Details of cash payments and Christmas bonus outlined in Sinn Féin’s alternative budget
QUIZ: Test your knowledge with this Ultimate Friends Character Quiz
The JOE Friday Pub Quiz: Week 313
A brilliant psychological thriller is among the movies on TV tonight
House Of The Dragon is already better than Game Of Thrones
One of the best films nobody went to see turns 15 years old this week
QUIZ: How well do you know your horror movie scream queens?
You may also like
1 day ago
2022's sexiest show is finally available to watch in Ireland
1 month ago
WATCH: The full trailer for Cobra Kai season 5 has landed
2 months ago
Comedian Rhod Gilbert reveals he is undergoing cancer treatment
2 months ago
Celebrity Juice axed by ITV after 14 years as Keith Lemon pays tribute to "the longest most fun party"
3 months ago
One of the best sitcoms of recent years is finally available to watch in Ireland
4 months ago
Dave Chappelle attacked on stage during Netflix stand-up show in LA
Next Page