We're sure you don't know anything about this...

It happens in workplaces around the world. You've had your suspicions, you've seen the pair exchanging glances. Leaving at similar times, and they're interacting with each other in groups differently.

But you thought nothing of it. Well, according to this new survey, there could be a very simple explanation to it all.

END_OF_DOCUMENT_TOKEN_TO_BE_REPLACED

In a survey by Yellow Octopus, it was revealed that 11% of people in the study had hooked up with a co-worker in work while 4% said they'd done the dance with no pants with a non-employee at work.

But don't be stepping loudly while walking around corners to alert people of your presence just yet, because most of the action takes place outside of office hours, 72% in fact.

Although, there's a chance that you may walk in on something as 14% of those who admitted to having sex with a co-worker in work, said they were interrupted during the... deed.

It's not just the act themselves that's happening in workplaces, plenty of them have fantasised about having a sex with a co-worker at some stage. 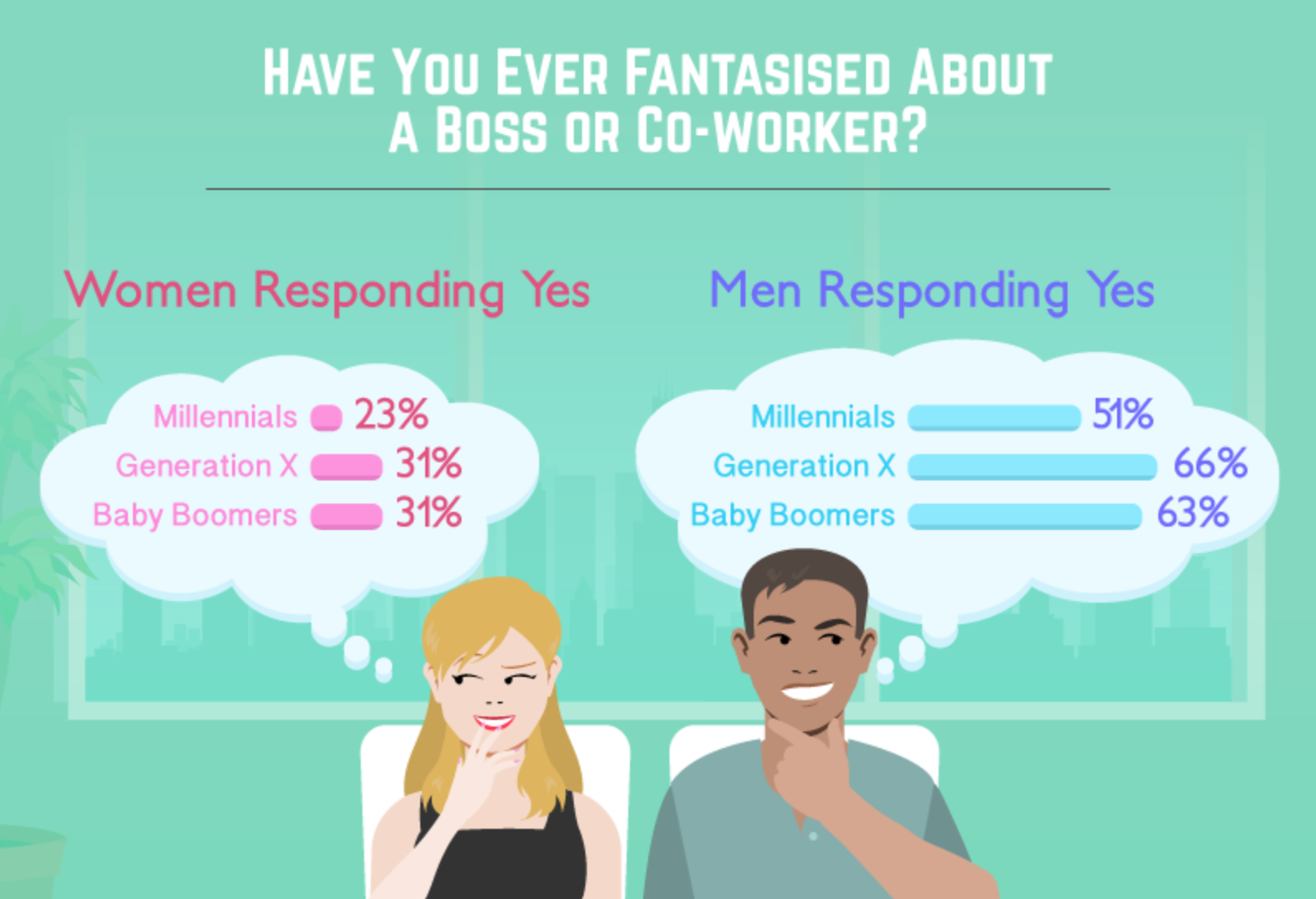 END_OF_DOCUMENT_TOKEN_TO_BE_REPLACED

In case you're unfamiliar, Generation X individuals are born between 1961 – 1981, and if the survey is to be believed, two thirds men in that bracket have thought about having sexual relations with a co-worker. Almost one third of Generation X women have fantasised about coworkers in a sexy, sexy setting.

But it seems Millennial's are significantly less randy than their older counterparts, with just 51%* of men fantasising about their co-workers being their lovers.

The number is even lower for Millennial women with just 23% thinking about their workplace colleagues being their  dance partners.

popular
Met Éireann updates weather warning for entire country as temperatures set to fall to -6
Céline Dion diagnosed with incurable neurological disease
The "eighth best movie ever made" is among the movies on TV tonight
Jennifer Lawrence sparks controversy by saying she was the first woman to lead an action movie
5 deadly destinations for a last-minute city break this winter
Star of Horrible Histories says cast arguably did 'blackface' by getting spray tans to play Egyptians
Shane MacGowan's wife shares update after singer is hospitalised
You may also like
1 week ago
Documentary reveals "one of the most stunning sex and political scandals of this century"
5 months ago
Pope Francis tells couples not to have sex before marriage for the sake of 'true love'
6 months ago
People with many sexual partners need to watch out for monkeypox, says chief UK doctor
7 months ago
Gogglebox sparks Ofcom complaints over X-rated scene between woman and a duck
1 year ago
Eternals will feature the Marvel Cinematic Universe's first sex scene
2 years ago
40% of 17-year-olds have not discussed sex with their parents
Next Page