"This country has had a very long and checkered history of policing female bodies."

The Cork author spoke candidly about feminism in Ireland, saying that it would be impossible to talk about it without referencing the struggle women have faced in Ireland under the law. 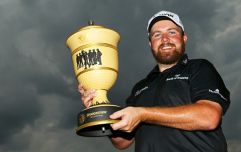 END_OF_DOCUMENT_TOKEN_TO_BE_REPLACED

She said: "I don't think you can talk about feminism in 2018 without talking about the fight to repeal the Eighth Amendment in this country.

"I think this country has had a very long and checkered history of policing female sexuality and female bodies, and the church and the state conspired to do that."

O'Neill went on to say that the Eighth Amendment is the "direct descendant" of the Mother and Baby Homes and the Magdalene Laundries.

She also called the upcoming referendum to repeal the Eighth a "time of reckoning for this country, a time where we can show that we are compassionate and kind and progressive."

Continuing, she said: "I think that young people - who are coming of age and now able to vote - their idea of feminism and their idea of being politically engaged will definitely include bodily autonomy for women and the freedom to make the right decisions."

"The male orgasm and male pleasure and male gratification is definitely prioritised and seen as very important which is obviously very wrong," she said.

Viewers took to Twitter to commend O'Neill for her fresh, honest, and intelligent approach to discussing these issues that affect women in Ireland - and around the world - every day.

“There’s a difference between being nice and being kind.” @oneilllo on the money yet again 🙌🏻 #latelate