Take this with a grain of very sexy salt...

A poll was submitted to reddit, and people voted where they felt the most attractive people around Europe resided.

While the openness of the vote should ensure a fair result, the 2,000 or so voters ended up giving almost an entire quarter of their votes to Sweden.

END_OF_DOCUMENT_TOKEN_TO_BE_REPLACED

Ireland seems to do... okay-ish. 28 votes don't seem like the end of the world.

There's more than a few nations that got a soul-destroying zero. Poor Malta!

But then you take into account that Vatican City managed to out-do us with 33 votes, and something seems a little ... off. 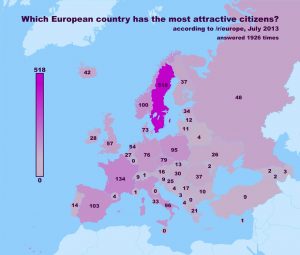 END_OF_DOCUMENT_TOKEN_TO_BE_REPLACED

In some cases, the higher the population, the more likely it is that someone will have crossed paths with them.

So that helps explain why France, Spain, Germany and UK have higher numbers (aside from, y'know, all the attractive people who live there).

But when you take into account that the Vatican only has a population of 1,000 (is everyone voting for the Pope), or the likes of Andorra, with a population of a little over 85,000, getting four votes, that reasoning goes right out the window.

What this map does seem to confirm is that most of Europe's attractive people seem to be residing in Scandinavia.

Any else suddenly up for a skiing holiday?

popular
Amazon Prime Video has just added 21 big movies to its library
Netflix has just quietly added 12 big movies to its library
Seven more suspected cases of unexplained hepatitis in Ireland under investigation
Gardaí investigating firearm being discharged near film set in Donegal
Couple injured after alleged homophobic attack in Dublin
The 50 most iconic songs of all time* have been revealed
Passengers warned that Dublin Airport situation is simply "unpredictable"
You may also like
2 months ago
30 years ago, Arnie's biggest prank ended with Stallone's biggest flop
3 months ago
China gives Fight Club a new ending, manages to completely change the plot of the movie
5 months ago
Who tweeted it: Simu Liu or Rahul Kohli?
6 months ago
Cow escapes field, heads to resort and gets stuck on water slide
7 months ago
Drunk man reported missing ends up joining search party to find himself
8 months ago
WATCH: The interview between Niall Horan and Lizzo is an absolute flirt-fest
Next Page