The best meme Ireland has seen for a long, long time is going around the world.

Unless you have been living under a rock, you are probably aware that the Friends Reunion episode aired in Ireland last Thursday and got a huge reaction across Irish Twitter - with one actor in particular quickly stealing the hearts of the nation.

Many people flocked to the app after noticing that Matt LeBlanc (who played struggling actor and food-loving womaniser Joey Tribbiani in the show) appears to be as fun and charming as his much-loved character, comparing the actor to what could be best described as "every Irish auld man".

“And come here would there be much money in that?” pic.twitter.com/G00SNp9spe

Seemingly everyone in Ireland began screenshotting a moment of the special in which LeBlanc is easily comparable to just about every Irish uncle, with side-splitting results.

Matt LeBlanc is 5 seconds away from slapping his knees and going “well we ought to make a move who’s ready to rock and roll” pic.twitter.com/WmAgtjjugX

However, it now seems that the iconic meme has gone global after a number of major American publications reported on the running joke on Monday - and it seems they're enjoying it just as much as we are.

While normally Twitter weighing in on your general vibe would be terrifying, Matt LeBlanc got to experience the best possible version of ithttps://t.co/bG8Y2o07Nc

“How You Getting On?”: Ireland Obsessed With “Irish Uncle” Matt LeBlanc After ‘Friends’ Reunion Special https://t.co/DESOS3g0df 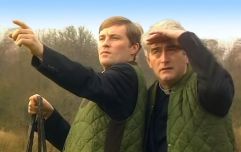 END_OF_DOCUMENT_TOKEN_TO_BE_REPLACED

With such exposure from such high-profile outlets on just how popular the meme has been in Ireland, it may not be long until LeBlanc sees the meme himself. Imagine him re-enacting some of the best ones?

In the meantime, why not take the time to check out (whether it's the first or 100th time) some of the funniest Irish LeBlanc memes from the weekend right here.

popular
One of the most-anticipated movies of the last few years is finally available to watch at home this week
The 50 most iconic songs of all time* have been revealed
PICS: The man with the biggest penis in the world has one unbelievable problem with it
Here’s how you can get 20 bets for €2* for the next EuroMillions jackpot
Almost 25 years on, one of the stars of Face/Off tells a personal Nic Cage story
Simon Harris and wife welcome arrival of new baby boy
Government announces special €1,860 payment for laid-off workers during pandemic
You may also like
15 hours ago
Disney announces incredible line-up of premieres for upcoming Disney+ Day
2 days ago
Midnight Mass review: Netflix's new series is a slow-burn drama ending in all-out horror
4 days ago
The Ultimate Dwayne "The Rock" Johnson Quiz
5 days ago
Gunpowder Milkshake has the makings of a perfect Friday night movie
6 days ago
A brilliant Irish psychological thriller and 5 more movies and shows to watch this week
1 week ago
Y: The Last Man star Ben Schnetzer on his brand new show, love for Diane Lane and pandemic productions
Next Page