Eating out or even just getting a hangover takeaway isn't always easy for veggies and vegans.

Between trying to find something decent on the menu to fielding all sorts of questions about your dietary choices ("What about smokey bacon crisps?"), sometimes you'd wonder if it's worth it at all.

Thankfully, help is at hand - more and more restaurants are upping their game and creating vegan food that doesn't taste like nothing at all, and McDonald's is now striving to ensure its non-meat-eating customers don't have to miss out.

The restaurant chain already announced last year that it was trialling a vegan-friendly burger. And now (hurrah!) it's being rolled out further. 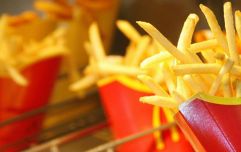 END_OF_DOCUMENT_TOKEN_TO_BE_REPLACED

Which all-in-all is pretty great news for anyone who's avoiding meat and actually wants to get a full meal at Maccy D's (without having to opt for a salad. You don't win friends with salad.)

The McVegan is a soy-based burger in a regular bun with all of the usual trimmings as well as 'vegan McFeast sauce'.
Sadly, if you're super keen on trying it asap you'll have to catch a flight as the burger is currently only being sold in Finland and Sweden, but we're hoping to see it hit Irish shores in the coming months.

popular
Netflix has just added an incredibly tense 97-minute thriller
Prime Video has just added 25 very big movies to its library
Stunning Mayo beach named the best place to swim in Ireland and the UK
The Ultimate "That Actor From That Thing" Quiz
QUIZ: Can you name all the counties in Ireland with an ‘N’ in their name?
The 50 most iconic songs of all time* have been revealed
A county-by-county breakdown of the average rent in Ireland as rent inflation reaches record high
You may also like
1 year ago
Animal rights protestors stage blockade at McDonald's UK distribution centres
1 year ago
McDonalds in China launch a limited edition Spam and Oreo Burger
2 years ago
McDonald's launch new line of loungewear to celebrate first ever McDelivery Night In
3 years ago
Rejoice, McDonald's are bringing back Aero McFlurrys
3 years ago
McDonald’s have launched a Gold Card competition which offers free food for life
4 years ago
JCB drives into Limerick McDonald's in failed burglary attempt
Next Page