PIC: This Conor McGregor fan might live to regret getting this tattoo come next month

We're still over a month out from the McGregor/Mayweather fight, but it is pretty much all anyone can talk about these days.

After the whirlwind tour of press conferences resulted in everything from McGregor's mic being cut off, Mayweather's comment about gloves sending people into a frenzy, the not very subtle message on McGregor's suit, Frankie Boyle's typically insightful opinion on the fight, and the furore around the allegations of racism against McGregor... it has been quite the couple of days.

And now, on top of all that, an Irish fan got in contact with us here to show off his new tattoo, and to say that he is fairly confident of the fight's outcome is a bit of an understatement. 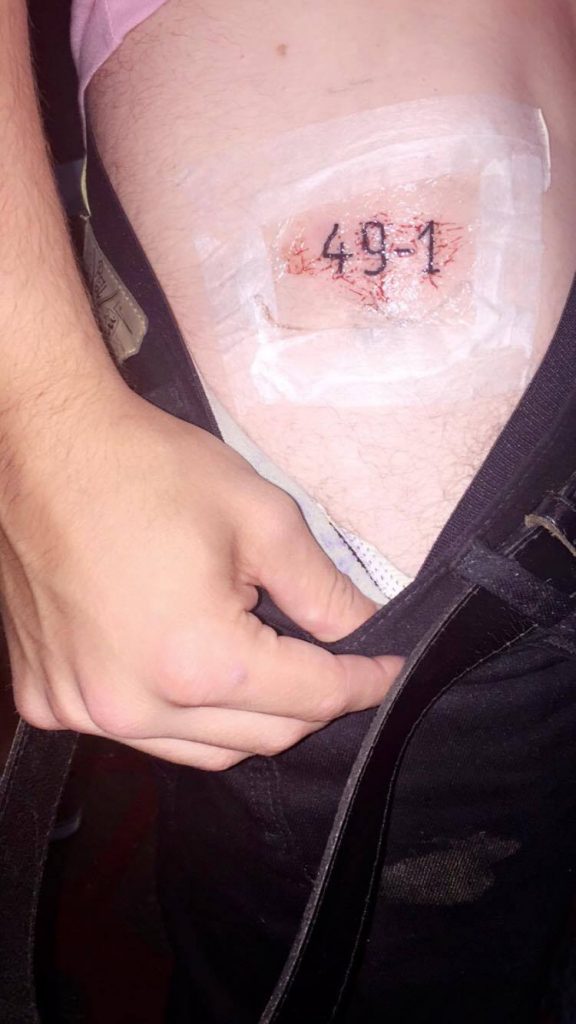 END_OF_DOCUMENT_TOKEN_TO_BE_REPLACED

In case you didn't know, 49 to 1 would be Mayweather's record should McGregor beat him next month, and the particular JOE reader is fairly certain that is exactly what is going to happen.

It is a fair sight better than getting a tattoo of McGregor's "Fuck You" suit, that's for certain.

House of Rugby Ireland · Quinn Roux on finding a home in Ireland and Mike McCarthy brings the absolute HEAT!
popular
The 50 most iconic songs of all time* have been revealed
Xbox reveals full list of exclusive games arriving in 2021
Snow and ice warning issued for seven counties
New year, new you, new career? This opportunity could be right up your street
Warner Bros. plan new Harry Potter movie and they want Daniel Radcliffe to star in it (Report)
11 arrested at planned protest at the Four Courts
RTÉ publishes list of top on-air earners for 2017 to 2019
You may also like
1 year ago
25 of the funniest tweets you might have missed in October
1 year ago
WATCH: RTÉ raised their game with their Halloween reporting on Thursday
1 year ago
PIC: Man discovers 1998 Spanish article naming part of Cork the most sexually repressed place in the world
1 year ago
Personality Test: What percent clown are you?
1 year ago
WATCH: The trailer for Season 14 of It's Always Sunny features melons, poison and laser tag
1 year ago
Here are the ten funniest jokes from this year's Edinburgh Fringe Festival
Next Page