Thankfully, no one was killed in this terrifying explosion in Russia, but unsurprisingly there were quite a few injuries. Six people were injured in the crash, which occurred at the intersection of Highway Morozov and Sysolsky in Syktyvkar, Russia.

Looking at the crash in the video below, and at the state of the Mitsubishi Outlander, those involved in the crash are definitely lucky not to have been killed. 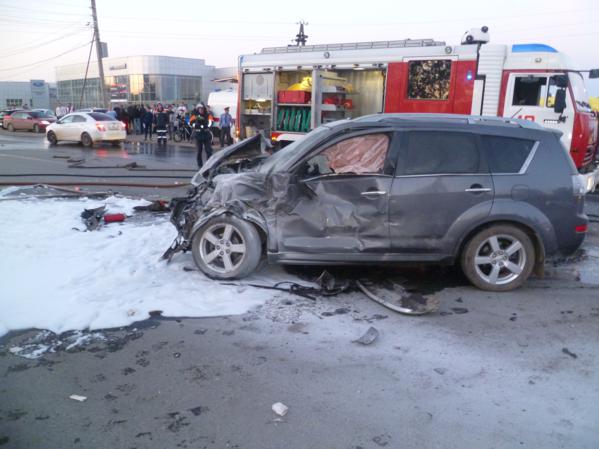 We have to say, fair play to the other road users who stopped to help and also to the fire brigade as it only took around four minutes for them to show up.

Here’s another video that shows the aftermath of the crash.

popular
Netflix has just quietly added 12 big movies to its library
Seven more suspected cases of unexplained hepatitis in Ireland under investigation
Gardaí investigating firearm being discharged near film set in Donegal
A thrilling '90s war film is among the movies on TV tonight
Amazon Prime Video has just added 21 big movies to its library
Has anyone seen Mr Tayto?
Couple injured after alleged homophobic attack in Dublin
You may also like
1 month ago
QUIZ: How many of these questions on the Driver Theory Test can you answer correctly?
4 months ago
QUIZ: Can you guess the meanings of all these dash symbols from your car?
5 months ago
These were the most viewed cars in Ireland
8 months ago
QUIZ: How well do you know your car logos?
11 months ago
The ultimate checklist of everything you need for your next Irish road trip
11 months ago
The iconic 'Bus W***ers' car from Inbetweeners is now up for sale
Next Page