For one night only, the grand Concert Hall will become a haunted house with a touch of the cirque du freak.

The thing about Halloween, and it is kind of the same thing about New Year's Eve, is that the amount of potential plans can get a little overwhelming.

And how do you know the plan you've made, the decision of the party you're going to attend at the expense of all the others, is going to be the right choice? What if one of the other parties is a whole lot better and you're here at this one which is... fine, I guess... 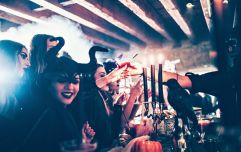 END_OF_DOCUMENT_TOKEN_TO_BE_REPLACED

However, the concern shouldn't be a problem if you decide to head along to Danse Macabre: Halloween's Monster Ball at the RDS Concert Hall.

Self-described as "Ireland's most decadent Halloween party", it comes from the same folk who brought Dublin the incredibly popular Prohibition and Gatsby themed parties that have sprung up recently.

The night is strictly fancy-dress, and across the night you'll cross paths with DJs, live music acts, dance and variety acts, immersive performances, cabaret, while Rocky Horror Picture Show Ireland will show you the moves for what is set to be Ireland's biggest time warp.

Danse Macabre is set to take place on Sunday 27 October, kicking off at 8pm, and tickets for the event can be purchased right here.

popular
The JOE Friday Pub Quiz: Week 308
Fine Gael announces special screenings of Michael Collins movie in 19 cinemas across Ireland
Controversial influencer Andrew Tate banned from Instagram and Facebook
Infant dies after being hit by jeep in Roscommon
Two Irish people arrested in "smuggling event" near Miami
Netflix has just added 23 very big movies to its library
Pilots fly over destination airport at 37,000 feet because they were both sleeping
You may also like
9 months ago
Eight people die at Squid Game Halloween party shooting
9 months ago
TG4 has once again raised the bar for Halloween night broadcast pranks
9 months ago
QUIZ: Can you guess the horror movie from a single image?
9 months ago
Horror bursts through your screen in the movies on TV tonight
9 months ago
Irish costume shop criticised for selling Nazi uniform as Halloween outfit
9 months ago
Deputy CMO says people can trick or treat safely this Halloween if they take "basic precautions"
Next Page