One player has won €250,000 from Saturday night's Lotto draw

Get checking those tickets!

Somebody is about to have the best Christmas ever. 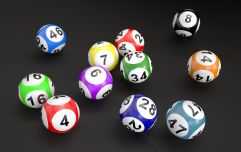 END_OF_DOCUMENT_TOKEN_TO_BE_REPLACED

Again, nobody won the €1,000,000 jackpot, with the biggest winners being the 13 players around the country who matched five numbers and will take home €500 each.

Yes, we noticed a lot of those numbers are the exact same ones from the Plus One draw, but the difference here is that somebody actually won the €250,000 jackpot.

We also know that the ticket was sold in the Mid West of the country.

So we said it before, we'll say it again. Get checking those tickets!

The Big Reviewski || JOE · TBR Spotlight: The Falcon and the Winter Soldier Episode Four - 'The Whole World is Watching'
popular
The JOE Friday Pub Quiz: Week 238
The JOE Music Quiz: Week 52
Thunder Force review: somebody needs to stop letting Melissa McCarthy's husband make movies
The Falcon and the Winter Soldier is on the precipice of dealing with an incredibly sensitive topic
The Falcon and the Winter Soldier's plan succeeds where The Boys have failed
QUIZ: Can you identify the cities of California from this list?
Irish mobile network GoMo launches new €14.99 per month "for life" offer
You may also like
3 weeks ago
Dublin player wins €500,000 on last night's EuroMillions Plus draw
2 months ago
Someone in Kerry has just won €1 million in the Lotto
4 months ago
€10.7 million lotto win still not claimed in Cork
4 months ago
Lotto players urged to check tickets after someone won €10.7 million
7 months ago
€2.4 million Lotto win in Convoy, Donegal
8 months ago
Tipperary Lotto winner has less than a week to claim over €70,000 from February draw
Next Page