"This is true community."

The Irish Kidney Association has shared that they have received over 4,000 donor card requests – some for multiple cards – since the airing of Orla Tinsley: Warrior on RTÉ on Monday night.

According to a spokesperson from the group, on an average day, they would receive less than 20 requests via either their freetext number or website. 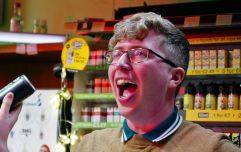 END_OF_DOCUMENT_TOKEN_TO_BE_REPLACED

The piece told the story of Tinsley, an avid Cystic Fibrosis campaigner, and her almost nine-month wait on a transplant list in New York, before finally undergoing life-saving surgery last December.

The 31-year-old Kildare native revealed all about her lifelong battle with the disease and how she wanted cameras to capture her gruelling wait for a lung transplant, even though there was a risk she would die while filming.

1. I'm so in love with everyone right now. The energy and the thousands of messages will take some time to get through. I appreciate every single one. I appreciate deeply the understanding and participation in changing lives that people have committed to. #organdonation

2. 4,000 and climbing. You are so beautiful. This is true community. This is how we are all connected and can help one another. Organ donation is the ultimate legacy. I am thinking of my donor right now because she is the reason I'm alive. #organdonation #recycleyourself

Tinsley first rose to prominence in Ireland when she campaigned for improved services and better access to drugs for people living with Cystic Fibrosis. However, after moving to New York, her health deteriorated when she suffered a bilateral lung collapse.

END_OF_DOCUMENT_TOKEN_TO_BE_REPLACED

Having left Ireland to study for a Masters in Creative Writing at Columbia University, she turned 30 in NYC, and, at almost the same time, was put on the list for a double lung transplant there.

Forced to postpone her studies, Orla’s condition deteriorated throughout 2017 and by December she was on life support at New York Presbyterian Hospital.

The documentary sparked a huge reaction online, in which she allowed cameras to chart the crushing lows and dizzying high when she finally received her transplant.

For those of you who wish to watch the documentary, you can do so on the RTÉ Player here.

And to request a donor card, you can do so via the freetext number (send DONOR to 50050) or via the website here.

House of Rugby Ireland · Ireland's feel-good win, Casey's initiation song, scrapping Sexton and Scott Williams interview
popular
Eoghan McDermott to leave RTÉ after six years (Report)
One man has been charged following Limerick street party, 50 FPNs issued
Sony are giving away a free game to all PS4 and PS5 owners
Two men arrested in Gardaí probe into bogus tradesmen
One of the most fertile men in Ireland is a guest on tonight's Claire Byrne Live
UK holiday firm Pontins used Irish surname blacklist to stop bookings
The 50 most iconic songs of all time* have been revealed
You may also like
21 hours ago
Get moving this April and raise funds for a good cause with Focus Ireland's virtual marathon
5 days ago
UK rapper Slowthai agrees to stop spitting in fans' mouths at gigs due to Covid-19
5 days ago
HSE Chief warns that mixing at school gates provides "higher risk" than classroom setting
6 days ago
Johnson & Johnson one-shot vaccine safe and effective, FDA finds
6 days ago
Covid can survive on clothing for up to 72 hours, study shows
1 week ago
Government looks set to abandon €9 substantial meal rule this year
Next Page