Would you be willing to try it?

When you hear the word "aphrodisiac", we all automatically think of oysters, yeah?

Either way, Deliveroo have teamed up with Irish ice-cream makers Scoop for a new special flavour just for Valentine's Day, and yes, it involves oysters.

The two companies have previously teamed up and gave us prosecco-flavoured and cheese-and-onion-flavoured ice cream, but this new one really takes the shell cake.

Scoop on Aungier Street in Dublin 2 will be the only place you can get Oyster & Champagne flavoured ice-cream on Thursday 14 February, which that have called Ice Scream. 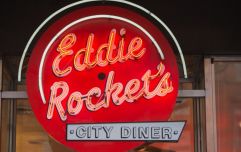 Eddie Rocket’s are giving away free kids meals this Friday

END_OF_DOCUMENT_TOKEN_TO_BE_REPLACED

Why they didn't call it "Oyscream", we don't know. It was right there!

Deliveroo's Bobby Burns tells us a bit about the product: "This Valentine’s Day, we intend to play Cupid for those looking to embrace the holiday of love to the fullest extent. We’re very happy to work with Scoop, who share our passion for pushing boundaries with innovative and delicious treats."

So there you have it. oyster and champagne flavoured ice-cream. What a time to be alive.


popular
The JOE Friday Pub Quiz: Week 175
The shortlist for the best breakfasts in Ireland has been revealed
Bodies of three children discovered in Dublin home
QUIZ: Can you guess the pixellated movie posters?
The 50 most iconic songs of all time* have been revealed
QUIZ: Can you name all these European countries just from their vowels?
Two operators of illegal puppy farm in Roscommon convicted of animal cruelty
You may also like
2 days ago
Here are Ireland’s favourite takeaways, as per the National Takeaway Awards
2 weeks ago
Suspected pool of blood in storage unit amongst reasons for six closure orders on Irish food businesses in December
2 weeks ago
Just Eat have revealed the finalists for this year's National Takeaway Awards
3 weeks ago
Six Irish food businesses served with closure orders in December
3 weeks ago
Birds Eye confirms that you can cook its waffles in the toaster
3 weeks ago
Subway has created a vegan Meatball Marinara and it's now available in restaurants
Next Page