"Don't buy with my imagined recommendation."

According to reports, images of Pat Kenny have appeared on adverts on Google, Facebook, and prominent news websites, without his permission or prior knowledge.

Two different posts have appeared, one with Kenny apparently recommending a specific form of erectile dysfunctional medication, and another is a "news story" that features a doctored image of Kenny with a black eye being escorted from the Newstalk premises. 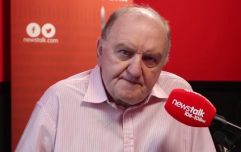 END_OF_DOCUMENT_TOKEN_TO_BE_REPLACED

Speaking to the Irish Independent, Kenny stated that "I was on a news website one morning and a picture of me advertising drugs for erectile dysfunction popped up. I just thought 'This is ridiculous. There will be people who believe all of this.'

"[I had been told] Ryan [Tubridy] and Claire Byrne and obviously Miriam [O’Callaghan] very publicly have the very same problem and [I was told] that something needs to be done about this. So my solicitor has written to Facebook and Google to ask them to deal with this."

Kenny has also warned his listeners on Newstalk not to pay much heed to the adverts or news stories:

"I just thought to let everyone out there know that if you see me advertising hair colour, erectile dysfunction materials, muscle enhancers or any such thing, it's not me. It's a scam of some sort. So don't buy with my imagined recommendation."

Earlier in the week, broadcaster Louise McSharry also posted about her wedding photos being used without her permission for a Facebook page about weight loss.

This Facebook page (which has only three likes) is promoting a post which uses our wedding photo with an absolute bullshit story and links to a non-existent story on a bot site. WTAF. pic.twitter.com/dymzPwmlI7

popular
Amazon Prime Video has quietly added 18 big releases to its library
Large crowds gather outside Tullamore courthouse as man charged with murder of Ashling Murphy
Over 80% of people working from home could be missing out on €100 tax relief
WATCH: This foul-mouthed argument proves the Irish language is alive and well
60 jobs available on Stena Line with 50% of your time spent not working
Here's the line-up for this week's Late Late Show
A gripping '90s thriller is among the movies on TV tonight
You may also like
2 months ago
Pat Kenny says he was "offered a spliff" the last time he took the DART
3 months ago
RSV outbreak in children "more contagious than Covid", says GP
8 months ago
Pat Kenny calls Stephen Donnelly's antigen test stance "propaganda" during heated debate
3 years ago
WATCH: Pat Kenny speaks about the moment he tore up Late Late Toy Show tickets on air
3 years ago
The Pat Kenny Show to air exclusive interview with head of 'Predator Exposure' group tonight
4 years ago
10 times The Late Late Show made the nation shout "WTF"
Next Page