Pic: A Meath man named Mick did an incredibly sound thing for this woman with car trouble

What a nice gesture.

Whether you drive or not, you've probably been in the situation where the car you're in has a dead battery.

The problem with that is for some reason there are about 10 sets of jump-leads in the whole country that we all share around.

END_OF_DOCUMENT_TOKEN_TO_BE_REPLACED

So chances are you'll have to call someone to come get you.

Claire Brennan was in that all too familiar situation over the weekend but a kind, selfless soul came to the rescue.

Claire explained to us what happened: "A kind man, noticed I had left my lights on, on my car on Saturday night in Navan. When I returned a few hours later, I found this note on my car. What an absolute gent." 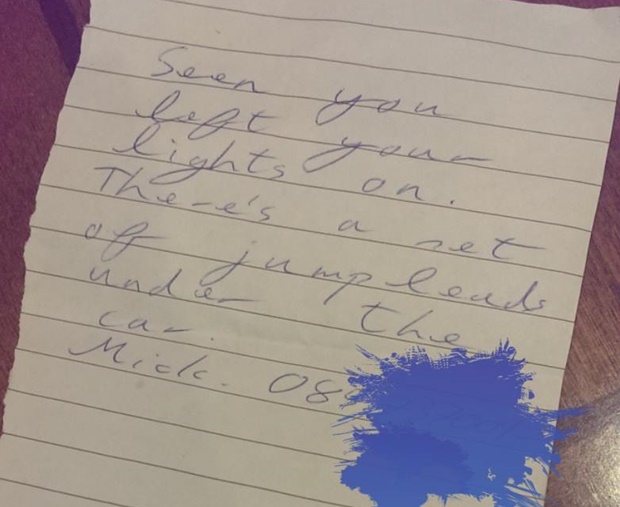 You can only imagine the relief when Claire found the jump-leads, which have since been returned to Mick, under her car.

Mick, you're an absolute legend. Good on you.

Thanks to Claire Brennan who sent this into us on Facebook.

House of Rugby Ireland · Murray & Sexton debate, France's Covid hell and James Tracy interview
popular
Dublin beauty salon owner arrested after reopening for second consecutive day
Johnson & Johnson one-shot vaccine safe and effective, FDA finds
Government looks set to abandon €9 substantial meal rule this year
10 years on, the ultimate example of Great Trailer Terrible Movie has yet to be topped
The full list of all the new shows and movies coming to Netflix in March
Galway Lotto players urged to check their tickets for unclaimed December prize
The expiry dates of driving licences has been extended again
You may also like
1 week ago
Trade union hits out at driving tests cancelled because weather was "too cold"
2 weeks ago
QUIZ: How well do you know your car logos?
2 months ago
Motorist arrested for driving at 207 km/h on motorway in Kildare
2 months ago
Over 300 Ford cars recalled in Ireland over battery issue that could lead to vehicle fire
3 months ago
An Garda Síochána launches host of new Garda vehicles
3 months ago
QUIZ: Can you correctly identify these classic cars?
Next Page