Pic: Fantastic tweet proves that being a jerk will cause karma to bite you in the ass

This is too good

Interviews are always a nervous process for most people because there's so much to comprehend and process.

Your experience, skill, intelligence, and personality all have to shine through in a very brief period of time but JOE is here to give you some tips. 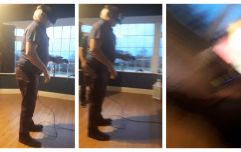 END_OF_DOCUMENT_TOKEN_TO_BE_REPLACED

1) Prepare well, 2) try to relax and 3) if all else fails then just cry on the spot and hope that the interviewer takes pity on you and gives you the job. It worked for me.

Oh yeah, for the love of god don't insult the person interviewing you.

Matt Buckland is a recruiter in London and he probably knows more about the process than most people. It seems that Matt didn't have a good start to his day recently after he was verbally insulted on his way to work.

What follows next is the very definition of karma.

Karma - the guy who pushed past me on the tube and then suggested I go F myself just arrived for his interview...with me...

Naturally there was some people on Twitter that doubted the legitimacy of this incident but Matt was quick to shoot down any neigh-sayers while also having some fun with this rude candidate.

@jimwebber yep... I asked lots of questions about the tube until it slowly started to dawn on him... — Matt Buckland (@ElSatanico) February 16, 2015

@paulsbanister @Holbornlolz I'm not sure he realised until the very end... very awkward!

@Anna_Seligman True. Could happen to anyone but was really unfortunate. I was nice though, only a few tube related questions — Matt Buckland (@ElSatanico) February 16, 2015

It seems that Matt is quite the professional when it comes to his job though because he was prepared to let the incident slide and give the candidate a fair interview.

@RiggerTheGeek @elliefleur I was nice. Hinted at it, he realised, laughed about it awkwardly and got on with the interview :)

We don't think he got the job though but this story instantly reminded us of this.

popular
Seven more suspected cases of unexplained hepatitis in Ireland under investigation
Netflix has just quietly added 12 big movies to its library
Amazon Prime Video has just added 21 big movies to its library
Gardaí investigating firearm being discharged near film set in Donegal
Tipperary woman banned from keeping dogs following animal cruelty conviction
The six Eurovision countries with "irregular voting patterns" have been revealed
QUIZ: Try out one of our trickiest General Knowledge Quizzes yet
You may also like
3 years ago
PICS: This attempted restoration of a 500-year-old statue looks absolutely woeful
5 years ago
WATCH: Hilarious footage of two Irish skiers losing control in Italy [NSFW]
5 years ago
This guy got savagely mocked online for not knowing how maths works
5 years ago
Everton official store ruins fan's Christmas with Manchester United crest
5 years ago
VIDEO: These guys tried to prank a McDonald's worker, it backfired badly
5 years ago
WATCH: Presenter writhes in agony live on Polish TV as magician's trick goes horribly wrong
Next Page