PIC: Four bees discovered living in a woman's eye, feeding on her tears

We're going to have nightmares about this for the rest of our lives.

A Taiwanese woman lived out our worst fears this week when no less the four bees ended up in her eyes.

The woman, whose full name was not revealed by CTS news — a Chinese news station — presented to hospital, assuming that she had an infection in her eye. 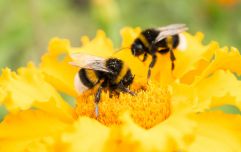 COMPETITION: Help save bees in Ireland AND win some amazing prizes at the same time

END_OF_DOCUMENT_TOKEN_TO_BE_REPLACED

But nope. It was bees.

Speaking at a press conference, the hospital’s head of ophthalmology Dr Hung Chi-ting said: “I saw something that looked like insect legs, so I pulled them out under a microscope slowly, and one at a time without damaging their bodies.”

The woman, identified only as He, was tending to a family member's grave when she felt something go into her eye, assuming it was dirt or soil. Again, no, it was bees.

As it turns out, the bees were feeding on the salt from her tears — which is absolutely the worst thing that we've ever heard. These kind of bees are referred to as sweat bees, precisely because they are attracted to the salt in human sweat.

Be warned: the photo below is not for the faint of heart.

Look at the TV pics from Taiwan.. these are not small bees. https://t.co/BvFzsjMjFy pic.twitter.com/maaKUCC9uq

popular
Netflix has just added an incredibly tense 97-minute thriller
Irish person dies after drowning in Spanish resort swimming pool
18 counties hit with weather warning as temperatures set to reach 29 degrees
Nearly 100 flights delayed at Dublin Airport on Monday
A county-by-county breakdown of the average rent in Ireland as rent inflation reaches record high
Second Covid booster vaccine being rolled out to more cohorts this week
QUIZ: Can you get top marks in this short but tricky Irish geography quiz?
You may also like
3 years ago
WATCH: Times Square shut down after a hot dog stand was infested by a huge swarm of bees
8 years ago
Up to 20 million bees released after truck carrying nearly 500 beehives overturns in Delaware
8 years ago
Video: How bee-zarre! Guy can't get into his car... because it's covered in 20,000 angry bees
8 years ago
Video: Wait, how did thousands of bees suddenly appear on a busy London street?
1 month ago
Ireland looks towards a four-day work week – is it all it's cracked up to be?
1 month ago
Doctor reveals why couples should always sleep in separate beds
Next Page