Pic: Katy Perry's looking very well on the cover of this month's GQ

The singer gives the American edition of the mag an interview and poses for some pics.

The February 2014 issue of American GQ goes big on Katy Perry. Six years after she became very famous indeed via the song 'I Kissed a Girl' the American is still going strong and she gives a long interview to GQ  on how she got to where she is, how she has the body she has and her belief that aliens are real. Yep, just her and Danny Dyer so.

Anyway, she also poses for some snaps, but you'll have to go out and buy the magazine to get a look at those but we can bring you the front cover where Katy is looking very well indeed. 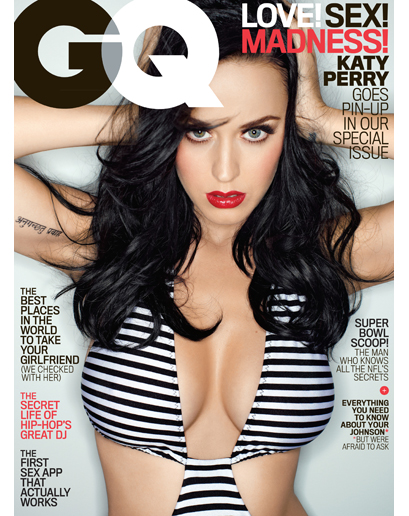 popular
QUIZ: It's time for one of our trickiest General Knowledge Quizzes yet
An underappreciated sci-fi blockbuster is among the movies on TV tonight
Landlords must give longer eviction notice periods under newly passed legislation
The JOE Movie Quiz: Week 161
The JOE Friday Pub Quiz: Week 301
QUIZ: Can you get 100% in JOE's great big halfway through 2022 quiz?
The 24 biggest movies still to come to cinemas in 2022
You may also like
5 years ago
PIC: Enda Kenny. On a Dublin Bike. In a vintage Mayo tracksuit. And a backwards cap. That is all.
5 years ago
PIC: You can almost feel this man's pain after his mates forcibly slapped his back
7 years ago
Pic: David Cameron stars in the funniest viral picture of the British election so far
7 years ago
Pic: WWE fan gets GIANT portrait of The Rock tattooed on their leg
7 years ago
Pic: Irishman snaps stunning pic of the Milky Way over Cork
7 years ago
Pic: Steven Gerrard posts a picture of the Liverpool team on the beer in New York
Next Page