PIC: Man comes home from a stag-do in Edinburgh to find a hilarious note from his wife

This has got to be true love.

After a Dublin man returned from a stag weekend for his buddy in Edinburgh, he retired to his room presumably to hit the hay and recuperate.

His wife and son were out of town until Wednesday, so upon reaching his bed he was pretty pleased to find a note addressed to him from his wife. Naturally, he assumed it would be a loving message full of kind words about they missed him and how they'd see him later on in the week... 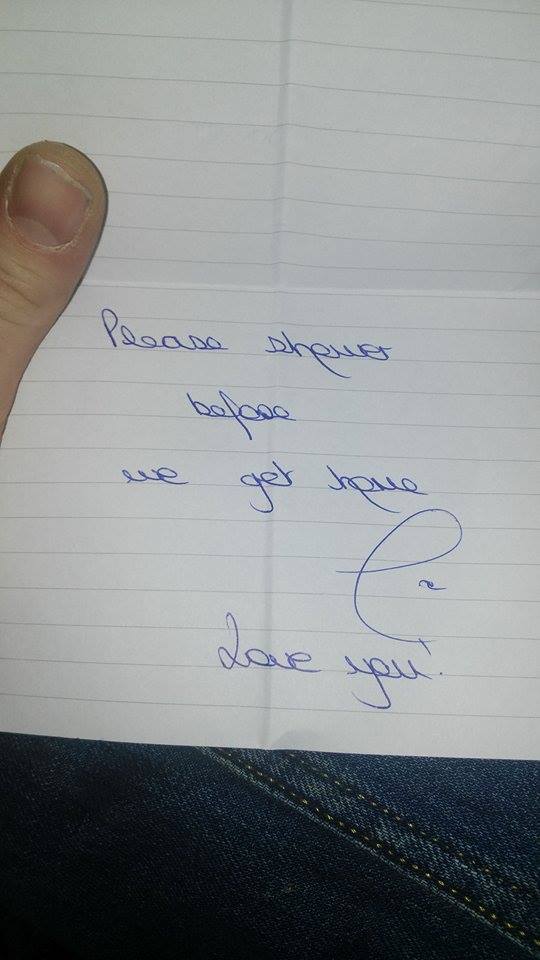 Short, sweet and to the point. Hit the showers Steven, we don't want to be able to smell you before we see you. But at least she loves him. D'awwww.

Cheers to Steven Daly for sending this one our way.

popular
Two new 24-hour bus services are coming to Dublin
Jeffrey Dahmer’s dad thinks he knows what’s to blame for son becoming a serial killer
Power-ranking the House of the Dragon characters after THAT big fire
QUIZ: Test your knowledge with this Ultimate Friends Character Quiz
WATCH: HBO's The Last Of Us trailer is finally here and it is brilliant
€600 energy credits and free schoolbooks for children set to be announced in Budget 2023
An underseen disaster film is among the movies on TV tonight
You may also like
8 months ago
Woman hospitalised following stag attack in Kerry
4 years ago
These lads on a stag do belted out an absolutely perfect version of The Whole of the Moon
5 years ago
PICS: Irish Manchester United fan suffers the ultimate humiliation on his stag in Barcelona
5 years ago
PICS: This Father Ted themed stag party made it all the way to the top of Croagh Patrick
5 years ago
PIC: Irish fella on his stag party learns the dangers of tan lines before a wedding
5 years ago
The most popular destinations for Irish stag parties have been revealed
Next Page