PIC: This fella woke up with the worst facial tattoo ever after a stag party

This is one of the worst things we've ever seen after a stag party.

If you've ever seen the film The Hangover II you'll know the part where Stu wakes up with a Mike Tyson-style face tattoo.

And after seeing this scene we imagine you probably thought 'I'd never been daft enough or drunk enough to actually do that.' 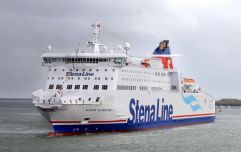 Stena Line are offering return trips between Ireland and Wales for €6.50

END_OF_DOCUMENT_TOKEN_TO_BE_REPLACED

Well, we were wrong.

This bloke from south Wales must have had a f**king heart attack when he woke up from his boozy slumber after the monster of all stag dos.

He had a pair of Ray Bans inked onto his face.

"I had no memory of getting the tattoo because I had gone out celebrating and it happened when I was drunk. Waking up the morning after, I thought someone had used a permanent marker on my face," he said, according to Mail Online.

"When I first came home, obviously I was subject to a lot of stares, but I kind of got used to the tattoo and decided not to get rid of it."

He eventually relented and had it lasered off his face.

popular
Amazon Prime Video has just added 21 big movies to its library
Netflix has just quietly added 12 big movies to its library
Seven more suspected cases of unexplained hepatitis in Ireland under investigation
Gardaí investigating firearm being discharged near film set in Donegal
Couple injured after alleged homophobic attack in Dublin
The 50 most iconic songs of all time* have been revealed
Passengers warned that Dublin Airport situation is simply "unpredictable"
You may also like
2 years ago
Former Wales and Lions wing Gareth Thomas reveals he has HIV
3 years ago
WATCH: Virgin Media One's promo for Ireland v Wales features Trump, Brexit, and Mike Tyson
3 years ago
UK planning to build a new nuclear power plant directly across the sea from South Dublin
3 years ago
The Football Spin featuring Martin O’Neill finding positives as Ireland bounce back with another defeat to Wales
3 years ago
The exasperated reaction to Ireland's humbling defeat to Wales
3 years ago
QUIZ: Can you remember the starting 11 from the last time we played Wales?
Next Page